I’ll be honest, if I’d told my kids the very first time that I was serving them ricotta cheese with their pasta they’d probably have screwed their noses up – or at least, the ringleader would have and the other two would have followed.

But when I said we were having ‘creamy’ pasta? Different reaction entirely! And after they had tasted it once and requested it another time, they were okay with knowing they liked ricotta cheese – at least on pasta [cue eye roll from me].

This recipe is a super fast, one dish meal that gets a tasty pasta dish to the table without all the guilt you might associate with serving up creamy sauces.

Can creamy be healthy?

Ricotta cheese, like all types of cheese, is a great source of calcium and provides a range of other essential nutrients including vitamin A, riboflavin, niacin, vitamin B12, Vitamin K, iodine, phosphorus, selenium and zinc.

But then they have to be nice, right?  So the next thing you need to know is that ricotta is a ‘fresh’ cheese and therefore ranked by nutritionists as one of the leanest and highest in protein in the whole cheese department.  There’s a great article about it here on Good Food Australia.

There are a number of optional items in this recipe, but it will taste great plain too.  If it’s one of those nights where it’s a choice between a plate of vegemite toast or this pasta, at least you’ll know they got a good whack of protein out of the ricotta you added to the pasta!

I frequently add a vegetable to pasta towards the end of a cook but they need to be already small, like peas, or chopped fairly small so they will not take too long to cook. It’s a bit mad to get out a second pot of boiling water when you’ve got a great big one on the stove, after all.

The trick with cutting out a separate veg cooking pan is  to estimate how long the veg will take to cook and subtract that time from the overall pasta cooking time.

Frozen veg added to boiling water will slow the cooking process down a bit more than fresh, but you can bring it up to speed faster by adding a lid until you hear the water rumbling away underneath again.

Here are some jobs I would potentially give to kids for this recipe, but you know yours best. 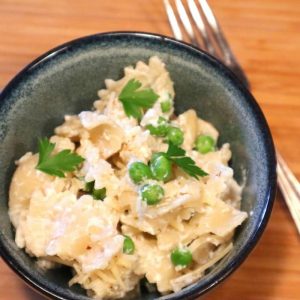 Bec Lloyd
A guilt-free creamy pasta that comes together within 15 minutes and only one pot to wash up!
Print Recipe Pin Recipe Add to Collection Go to Collections

If you have a determinedly carnivorous family, bacon or ham goes very well with this mix. A low mess approach is to put some chopped bacon between layers of paper towel and microwave it for a few minutes, checking every 30-40 seconds for doneness. If you’ve not yet discovered how great freshly grated nutmeg is, now’s the time to try.  Unlike other spices, whole nutmegs last for years and years and you only grate a little off the side each time. I just use a normal small holed grater. Try just a sprinkle at first, as it can be quite strong and you can’t take it away once it’s in the cheese!
Tried this recipe?Let us know how it was!