A Letter from Lori: How a Meal Mean’t the World 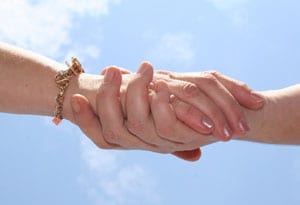 I wanted to write to mention a post from here to let you know how it impacted on my life.

In January this year, my mother was diagnosed with Bowel Cancer. Due to the aggressive nature of this illness, Mum was already in the final stages, and we were told that she had about six months to live without treatment; 12-18 months if she consented to some palliative chemotherapy.

After a bowel resection to remove the blockage that had led to the discovery of her cancer and three weeks in hospital, she returned home to get stronger before her chemo began. Sadly, she injured her back a few weeks after this which we later found out was a fracture. She returned to hospital and three weeks later, she gave in to the unmanageable pain and passed away, at 64 years of age. In just over two months, my mother had gone from being a relatively healthy newly retired Nanna, to being gone from my life and that of my children.

My mum was my best friend next to my husband, and the loss for me has been huge. Despite the platitudes that are expressed when you suffer a loss, the pain is not getting any less – in fact it is getting more intense and I’m facing the good old ‘black dog’ at the moment, although resisting the need for medication. I’m determined to work through things with the help of my psychologist rather than drugs, despite how full of sorrow I feel at the moment.

Anyway, the point I wanted to get to in this message was to mention your post of a while back which suggested that the ‘MamaBakers’ out there should bake something for a friend in need or someone who wasn’t doing too well at that time.

I did comment on it, briefly telling my story of being Mum’s only carer and the impact it was having on my life at the time, while trying also to care for my family, saying how much of a help a meal or whatever would have been to me. Things for me, of course, got considerably worse after that, but in Mum’s death, I have found that the most helpful thing that my dear friends have done for me, aside from giving me a shoulder and being there for me in that regard, was to cook me a meal and drop it in.

So many people offered to ‘help’ or asked what they could do, but I’m not the sort of person who would ask someone to cook me a meal. The relief when a friend gave me a batch of yummy cookies and some spag bog and pasta was immeasurable. Just knowing I had everything I needed to put together a meal without really having to worry was worth so very much to me.
Anyway, I wanted to share that with you and am hoping that you can pass it on to the MamaBake community. I know what to do now if, heaven forbid, a dear friend is in the position where they suffer a loss.