Can you substitute wheat flour with almond meal or coconut flour? 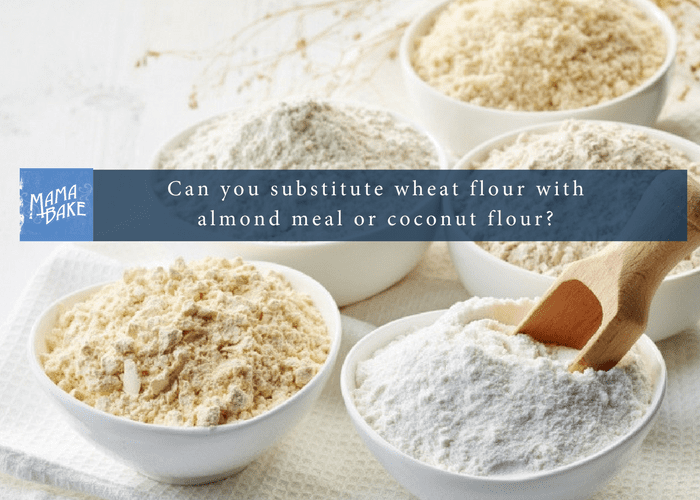 During a live Q&A session on our Facebook page, one mama asked about substituting wheat flour for almond meal in a cake recipe. This is a question frequently asked in relation to subbing flours with gluten to those without. A quick answer to this question is that it is not generally possible to substitute wheat flour for any other flour at a 1:1 ratio or any obvious ratio at all.

Recipes are written with an expected outcome of the reaction of specific ingredients. As there are few single types of flour that react the same way as wheat flour, a significant amount of recipe tweaking is required to get a close result to the original recipe.

So, what exactly IS almond flour or almond meal? It is simply almonds that are ground down to varying fineness.

While frequently seen in cake recipes such as moist and chewy friands, it is also used as a sauce thickener and can be used as a crumb coating, as in breadcrumbs.

While personally, I use either depending on which I can get at the time, the best rule for buying almond meal is getting the freshest stuff possible. Old almond meal can be quite oily as the natural nut oils begin to release from the grains. This can negatively affect your baking results with excessive dampness. At the patisserie where I apprenticed, we once received a bag of not-very-fresh almond meal and it ruined successive batches of macarons (which we were all punished for) until we discovered the culprit.

Almond Meal/Flour and other Nut Flours

Almond meal and other nut meals/flours such as hazelnut are naturally moister and include fat unlike wheat flour, and so other ingredients such as butter, eggs and other liquids need to be rebalanced to make this possible. This can require a lot of experimentation.

A cup of almond flour is also much heavier than a cup of wheat flour. Often the recipe will require up to 50% less of the fat content and a larger amount of dry (so a larger amount of almond flour). Furthermore, raising agents such as baking powder won’t react as well with almond meal, so will also need to be increased. A replacement for gluten may be required for baked goods that are supposed to have good structure; almond meal based sweets tend to be fragile and crumbly as there is no gluten to stick it all together. A gluten replacement such as xanthan gum, or ground up flaxseeds or chia seeds can often do the trick, but the amount required is uncertain.

Generally, if you have a recipe you’d like to recreate using almond flour instead of wheat flour, then your best bet is to have a look online to see if you can find a similar recipe with your preferred ingredients. This will mean that someone out there has done the experimenting for you.

Another option for natural, non-grain gluten-free flour is coconut flour. Coconut flour is a by-product from the production of coconut milk; it is the dry solid left behind once the liquid has been extracted. The dry coconut meat is further dried at low temperature and then ground into a fine flour.  Like nut flours, coconut flour is nutritious and flavourful being high in protein and fibre as well as good fats. Coconut flour is also high in manganese, vitamin C and thiamine.

Differing from almond meal, coconut flour can actually absorb moisture in baked goods, while almond flour introduces extra moisture. Many food writers recommend using double the amount of eggs a recipe requires while reducing the amount of flour. This can mean something like 1/3 cup of coconut flour to 2 eggs where the original recipe required 1 cup of wheat flour and 1 egg. I’ve used a combination of coconut flour and coconut flakes soaked in boiling water in making lamingtons and the result was dense but far more delicious. I reduced the amount of flour by half and added an additional egg. The water soaked coconut added additional moisture, texture and flavour. It wasn’t nearly as pretty as a fluffy yellow sponge, but slathered with chocolate icing and covered with yet more coconut, no one really cared.

So generally, substituting any other flour for wheat flour can be a very difficult experience. As we have been conditioned to expect certain results from baking with wheat flour, when attempting to avoid gluten we can hope desperately to find a catch all replacement. However each type of flour – whether nut, fruit or grain based – has its own properties and applications. Your best bet is always going to be looking for recipes which already use your preferred flour so that you don’t have to waste a lot of time and ingredients with experimentation.

The best gluten-free flours are made from a combination of base flours and starches to achieve a result that is stable, light in texture and tastes good. It is important to note that in beginning to bake with non-wheat based flours, that it is best to approach with an open mind and different expectations. It is very unlikely that your gluten-free cakes will turn out quite like the old wheat based sort, but they will be full of new flavours and textures to adopt your palate to. You may find that after a while you don’t miss bland old wheat flour at all.