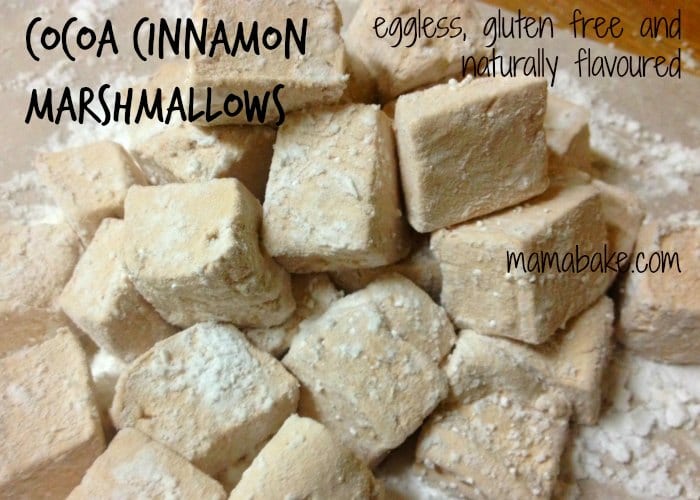 These marshmallows are cheap to make, yield a large batch and are flavoured naturally with cocoa and cinnamon. They are made from sugar, gelatine and water; this is an eggwhite-less recipe and is also naturally gluten free. This recipe yields bouncy marshmallows that are quite resistant to the weepy tendencies that some recipes have should they be attempted in damp weather (I live in a cloud, so I have this problem constantly when making confectionary). They last up to 2 weeks, retaining decent texture. I served these with hot chocolate at my son’s 5th birthday party and they went down a treat. They also toast well oven an open fire; unlike many homemade marshmallow recipes they are actually pretty robust when being roasted and don’t immediately collapse under the heat. I recommend using a stand mixer for this recipe, though if you have a powerful electric whisk then that could work too.

Bloom the gelatine in half a cup of water. Give it a little stir to ensure that all the gelatine absorbs the water. Dust a piece of baking paper with half of your combination of icing sugar and potato starch or corn starch.

Add half a cup of water and the 2 cups of sugar to a medium saucepan. Place the pot on high heat and bring the mix to the boil.

Remove the mixture from heat and pour the syrup into the bowl of your stand mixer or into a large metal bowl.

Using the whisk attachment, mix on low heat for 3-4 minutes until the steam has mostly dissipated. Then turn it on full speed and whisk until the mixture has doubled in volume and holds its shape like stiffened eggwhites. As it approaches nearly stiff, gradually add the cocoa and cinnamon. It helps to drape a tea towel over the mixer when you do this, because the speed of the whisk will knock some of the powder out of the bowl.

Working quickly, using a spatula, scrape the marshmallow from the bowl and smooth it over your prepared piece of baking paper. When you have smoothed it to the thickness you prefer (3 cm high is good), dust the top with more icing sugar and potato starch and allow to set for at least half an hour. When fully set, cut into cubes with a clean sharp knife, cleaning the knife after each cut. Dust marshmallow pieces in more sugar/starch mixture.

Keep in an airtight container for up to 2 weeks.

Alternatively, if you are going to use this for adding to hot chocolates, I sometime distribute half the marshmallow into a plastic sealable container without any starch or icing sugar. This gives you a marshmallow that dissolves nicely into hot drinks without any extra starch or sugar.

Notes: if you prefer you can flavour these marshmallows with liquid essences and add food colouring. However the recipe is robust enough that it can withstand additions of heavier solid flavourings towards the end of mixing time. Freeze dried fruit is a delicious addition to marshmallows.