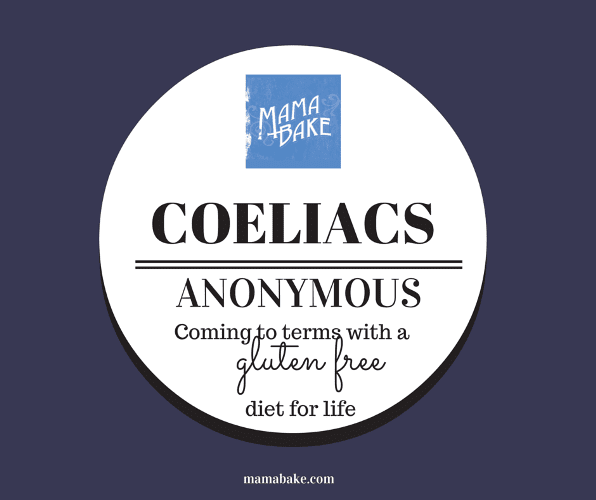 Seriously, there needs to be a 12 Step Program for foodies like me, who suddenly discover that they can no longer eat whatever they want. Being diagnosed as a coeliac is life changing, and, although now I am reaping the health rewards of my gluten free diet, initially I was devastated at this loss of my gastronomic freedom.

Temptation is everywhere….surely one little croissant won’t hurt? How can this innocent looking cupcake do me any harm? I’ll just have one last baguette and then I’ll stop for good. I know I will. I can stop any time, right? The withdrawal I felt was nothing short of narcotic in its severity. Giving up smoking was easier than giving up gluten. But, as with cigarettes, I simply cannot have ‘just one’. Every pastry is doing me damage.

I had visions of gorging myself on the entire contents of my favourite bakery, resulting in waking on my kitchen floor from my gluten induced coma, dazed and confused the next morning. Something had to be done.

All I could do was surrender, and, before I could lose motivation, I cleaned out every gluten containing food from my house. An hour later, I was faced with a virtually empty fridge and pantry. Thought gluten was just in flour? Think again. It’s EVERYWHERE!

I sat on the floor staring into the vast emptiness of my pantry and wondered how I would survive eating nothing but rice cakes for the rest of my life. I was also 12 weeks pregnant and suddenly had the only food that didn’t make me throw up taken away…..soft white bread and vegemite. 2920 days later and the sight of a soft, fresh piece of white bread, thick with butter and black, glorious Vegemite is enough to send me sobbing into the next room.

Having no choice but to re-stock my supplies, I hit the shops. Thankfully, with more and more people discovering allergies or intolerances to gluten, there is a swathe of products to choose from. I happily loaded up my trolley with the gluten free equivalents of my favourite foods. My usual ‘in and out’ shopping trip became a multi-hour, reading marathon, as I checked and re-checked the ingredients label on each item being placed in my trolley. Upon reaching the checkout I quickly realised that I may, in fact, have to sell the first born child I was carrying, in order to pay for my weekly shop!

Though many, many products failed in their attempts to re-create their gluten filled compatriots, (think GF vegemite – a jelly like, beef smelling, wobbling jar of revoltingness), some equaled, if not bettered them. Gluten free pasta, for example, based on quinoa and amaranth; produce a wonderful, light alternative to the dense, heavy traditional pastas.

Gluten free bread, however, gets the big thumbs down. I tried every single brand imaginable and was disappointed at every turn. I think I may have cried when my first attempt at a ham, cheese and tomato toasted sandwich crumbled in my hands. There are days in a pregnancy when only a toasted sandwich will do. Just as I resigned myself to a sandwich free existence, we discovered the bread that has literally changed my life. Even my mother, a bread aficionado, enjoys it. So, the range is out there, it just takes some looking.

Eating out was a whole other story as the main gluten free menu items seem to be one of two things: flourless chocolate mud cake or orange almond cake. Whilst the idea of cake for dinner was marvelous in the beginning, by my third attempt to have a restaurant meal, I was left hungry with the lack of options. Having to be that customer asking of every meal “Does this have gluten? How is this prepared?” sucked the joy out of devouring a menu and ordering according to my craving, not my allergy. Thankfully, being so heavily pregnant by this point, when most people were turning up for their 7pm booking, I had already been asleep for two hours!

All kitchen activities ceased in the months following my diagnosis. Not only did the smell of most foods make me want to hurl, but the joy of producing sweet, fluffy cakes and biscuits had been stolen, replaced by opening a pre-prepared packet mix and chucking a couple of eggs in. It just wasn’t the same. As I got used to this new way of eating, and discovered how much better I felt on this ‘diet’ of predominantly fresh fruit and vegetables and home prepared food, I eased my way back into baking and have found, after many failed experiments, that you can re-produce all your favourite treats gluten free and derive as much joy from the process as before…..OK, except for pasty; gluten free puff pastry……..I yearn for it, yet there is no packet mix, no recipe that can re-create that golden buttery, flakey covering.

Even our MamaBake group is gluten free for me and to be honest, I don’t think it’s caused anyone a problem. Given that we adhere to the fresh, wholesome food rules, there is little to no pre-packaged food used in our meals and it’s simple to substitute a GF pasta or stock if it’s needed. No worries.

As my nutritionist said, it’s hard to call being coeliac a disease, as really, it just demands you eat fresh, healthy, unprocessed foods. It really just demands you take control over what you put in your mouth and read, really read the ingredients. It forces you to return to the basics of home cookery, so you can be sure that your food is uncontaminated. How can this be a bad thing? Pre-diagnosis, I had days where everything I consumed was white (with the odd chuck of yellow cheese thrown in); now my diet is multi coloured and healthy. Add to that how much better I feel when I adhere to my GF diet and I know I’ll stick this life long diet change out…..well, for the most part.

Unlike the evil ciggies, I have fallen off the gluten wagon and have come to realise that the moment of pure, gastronomical pleasure, when my taste buds stand up and say “Where have you been all this time?” to the croissant or honey rich spelt flour rolls I find so hard to resist, is just not worth the aftermath. Still, if ever I was to be held for questioning and required a wee bit of torture, save yourself the trouble and just wave a Vegemite sandwich under my nose. I’ll break in seconds.