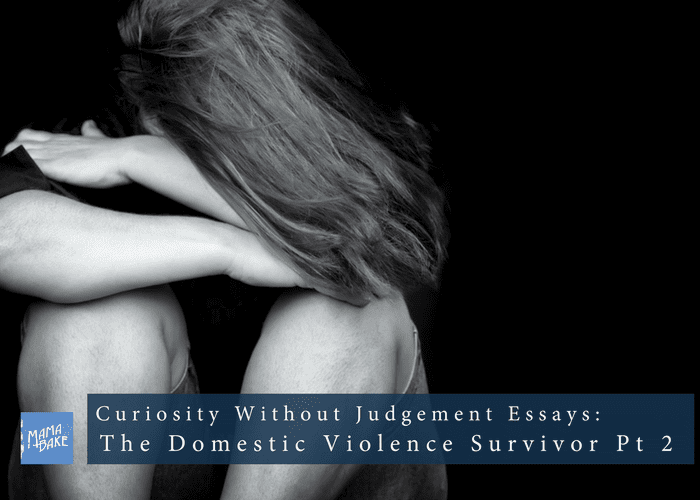 I was only home for a day, when I realised we needed food. I had fifty dollars in my wallet so we all drove to the shops and Lennard warned me not to spend too much money. When we finished and returned to the car, as I drove Lennard counted the left over money frantically. He had wanted me to spend a minimal amount so he could use the rest to buy marijuana. His fury was huge. I told him that he would never change and he began to hit me against the side of my head, causing my vision to blur. I tried to stop the car but he kept punching.

I woke up in the car in a ditch by the side of the road, listening to my daughters screaming, my swollen face preventing me from opening my left eye. The children were physically unharmed, and my baby son was not even crying, staring at us unmoved. The image stuck in my head, and I realised that my girls would grow up to believe that abuse is normal and my son would believe that he has the right to beat women.

This was the moment I finally understood what I had to do. Sobbing, I got out of the car, while Lennard got into the driver’s seat. I sat in the passenger seat and he drove us home while I cried. The next morning when Lennard had left for work, I packed everything I could into the car, took the children and went to my mum’s house never to return.

Two years later, still emotionally damaged, I moved the children and I into our own home and did my best to stay afloat. We moved to a town 3 hours away from Lennard. Once a month he would visit to see the children and would stay overnight as there was nowhere else for him to go. He became paranoid that I was sleeping with other men and checked my phone for numbers he did not recognise. I told him, that if he wanted to see the children he would have to take them somewhere else, not at my house. I took out an AVO that stated he couldn’t molest, harass, assault or intimidate me, but that he was still allowed to come near me. I did this to make access visits easier for both of us and it worked well.

Later on, things came to a head when I needed a tonsillectomy which required day surgery and I asked Lennard to take care of the children for the day. After the surgery I returned home with my best friend who intended to help me that day. I asked Lennard when he was going home, he looked insulted and said that he was planning to stay the night. I felt really uncomfortable with this and but I didn’t want to leave him on the streets since it was such a long way home.

He started making jokes about my friend’s appearance, and though I tried to stop him, he became more insulting and agitated and began to start on me. I asked him to leave. He refused to move. He stared down at the coffee table. He was getting angrier and I noticed something shiny under the table and realised he had hidden a knife underneath. Seeing that I had noticed it, he pointed the knife at me screaming in my face that he was going to kill me because I was sleeping with someone else. He kept lunging at me and made stabbing motions at my friend. I grabbed my phone and called 000 but when he noticed and came at me I hung up.

The police returned my call and I told Lennard that if I don’t answer the phone they will think something is. I answered the phone I told them “Look, everything is okay, just a slight disagreement but it’s all sorted out”, the officer could tell I was reluctant to speak, so they asked if an AVO was in place to which I simply replied “yes”.

They said they would send someone straight away and I hung up and pretended like everything was fine. He saw the red and blue lights and quickly ran for the door and took off. My friend and I hugged we cried. The police managed to track him down and arrested him. They were dragging him in cuffs to the police car that was parked in my driveway; I could see him kicking the female police guard and spitting on her.

They put him in the back of the paddy wagon, and came over to interview me. I could hear him banging his head inside the paddy wagon from the inside screaming “Just let me speak to Claire, she will know how to calm me down!” I wanted to help him, but the policewoman told me if I did I was just letting him win. I ignored him. He was sentenced to 9 months in prison for breach of an AVO.

I finally had the power to leave and stand up for myself. Life was hard; I sought counselling, and attended therapy. I found out I had post-traumatic stress from the domestic violence. My doctor discovered that I have permanent hearing loss in one ear due to the cigarette burns in my eardrum. I also have brain damage similar to a stroke victim such as word jumbling, forgetfulness, mind blanks and also have tear to my uterus from the beatings. I thought leaving Lennard meant my life would instantly improve, and in some ways it did, but it was a struggle.

We moved in with my mum, and she helped me with every aspect of my life. I am truly thankful for her. Now I had a stable home, money, support and love; everything I needed. With the support she provided and my children in school or care, I had time to think about my own future. I undertook a Certificate III in Disabilities and volunteered at a disability agency. I then did a Certificate IV in Community Services and then did a Degree in Criminology. I gained paid employment working as a support worker for a drug and alcohol centre where I came across many women who had similar experiences as I had. I shared my stories with them as they shared their own. I’ve been told that these women learnt from me and were inspired, but honestly I was just as inspired by them.

I now have employment within the justice system. I reunited with my best friend from high school whom I hadn’t seen in years. We hit it off! We actually fell in love and got married last year. Thankfully, my husband is a caring, sweet, gentle, beautiful man whom my children adore just as much as I do.

Today, my children are excelling. They also attended counselling and I believe they are still affected by what they have been though, but we are working on it. After years of hard work, dedication, sweat and tears, and I am in the happiest place I have ever been.

This year I received the Young Australian of the Year award for my local shire. One of my clients at the drug and alcohol centre anonymously nominated me because she felt I gave her the strength to leave her violent partner and quit abusing drugs. This truly is the most humbling award that I could possibly receive, I am so honoured that I have affected someone’s life to know that they are of worth and deserve more than what they have.

When Lennard and I first got together we had some couples tattoos done: I got a butterfly and he had a jabberwocky style dragon breathing flames. When I finally escaped him I wanted to get something that symbolised that I had finally beat him, overcoming his psychological manipulation and denying his access to me for abuse; I slayed the dragon.

I adore Alice in Wonderland and relate to her adventure and open minded fascination for new worlds but also her awareness of the underlying evil, danger and wrongness. My tattoo shows my triumph and strength, reminding me of the obstacles I have overcome and the strength there is within me. I know there are other women out there who are experiencing domestic violence, I know there are women who are questioning their worth and wondering if there is more to life.

My message to them is that there is. There is so much out there for you, you are worth more than you will ever know. It may take time, it may take effort and a lot of tears but I promise you, it is worth it in the long run.

We all have the power to be dragon slayers. 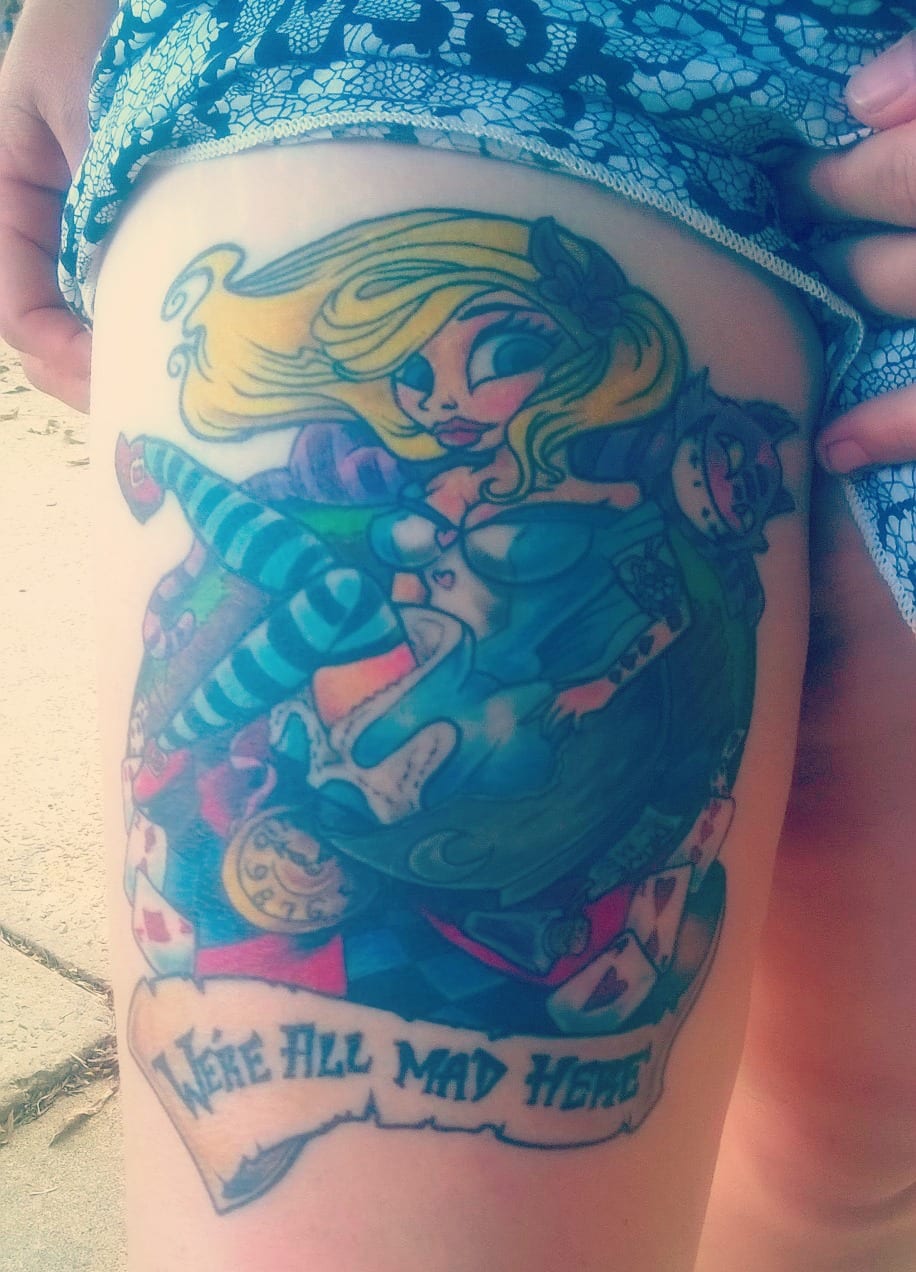 If you are experiencing any form of domestic violence go here to find help.