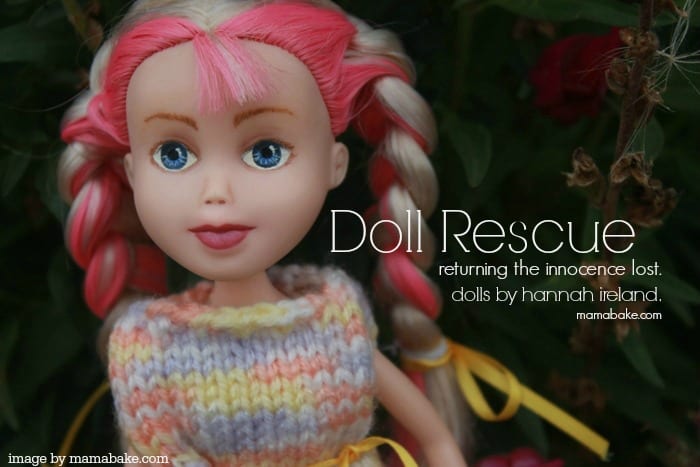 I’m sitting down here to write this post after spending an hour online immersing myself in the online world of Bratz*.  Having a son, I am somewhat sheltered from this ‘pink’ marketing (don’t get me started on the mainstream toys aimed at boys), which is perhaps why my jaw is still on the floor and I am rendered virtually speechless by what I have seen and read.  My head is swimming with so many thoughts and reactions.  The first is disbelief.  But underneath my extremely passionate reaction to the language, look and image of these dolls, is a feeling that as a young girl, I would have wanted one.  In my know it all rebellion I would have wanted the doll that made my mother react to the point of banning them.  I would have totally bought the ‘Girl Power’ gloss they try to use to cover the overt sexualisation these dolls represent.  I would have played with them and I probably would have ended up ‘OK.’  Isn’t that the easiest defence to throw off when someone criticises what most just brush off as a part of childhood?

“I played with Barbie and I turned out OK.”

But did I?  Are the body image issues, the quest for thinness and popularity in high school, the endless shopping and search for glamour of my early 20s, all a combination of growing up in a society that tells young girls and women that you CAN be anything you want to be, you ARE powerful……as long as you are thin, pretty, have awesome hair and a good looking boyfriend?

Harmless fun?  Mm, maybe, but don’t we want to give our young girls more than empowerment based on how sexy they are?  How about marketers try not to completely dumb down the ‘voice’ of their characters to suit the current teenage vernacular, but use ‘normal’ language? Perhaps then our young girls won’t feel like they have to “Totes hide their intelligence under talk of rocking fashion trendz and looking for hot boyz.”  Perhaps then, as our young girls grow into young women, they won’t feel like their worth in any arena is judged by how f***able they are?

I’m trying to work out what age child I would happily let play with some of these dolls on the market today.  I’m drawing a blank.  Certainly not my best friends’ girls who are nearly 4 and just 6.  Certainly not a vulnerable 12 year old.  I’m left wondering where their place is?   Teens don’t want a toy that represents them; teens want to do grown up things. It’s the little girls who want the teen dolls, learning from the assigned style of play that the dolls prescribe and applying those same ideas to their current and future selves.

“The objectified sexuality presented by these dolls, as opposed to the healthy sexuality that develops as a normal part of adolescence, is limiting for adolescent girls, and even more so for the very young girls who represent the market for these dolls.” (source) 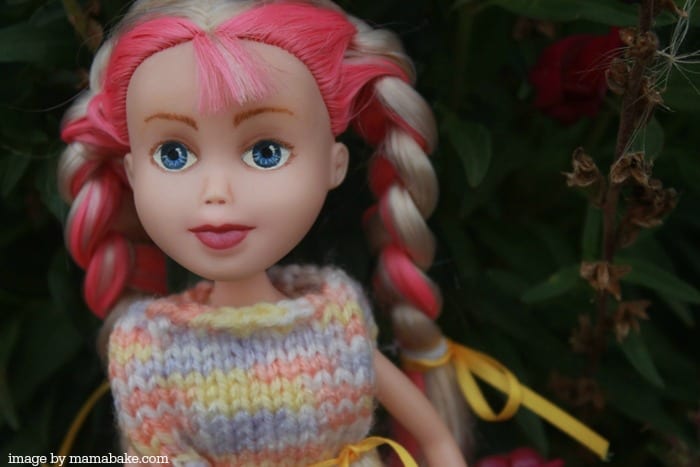 There is a real wind of change starting to blow amongst concerned mothers around the world at the role of these and other dolls in their daughter’s lives.  Sonia Singh’s Tree Change Dolls received worldwide attention and started a movement of bringing young children’s dolls back “Down to Earth”.

One inspirational woman in the MamaBake community, Hannah, has taken on the task of making under a series of dolls for her two daughters.  From the make up to the clothes, Hannah has re-done every aspect of these dolls and I’m sure you will agree, the results are breathtaking. I am honoured to call her my best friend, and was thrilled when she agreed to share her creations and story with us. 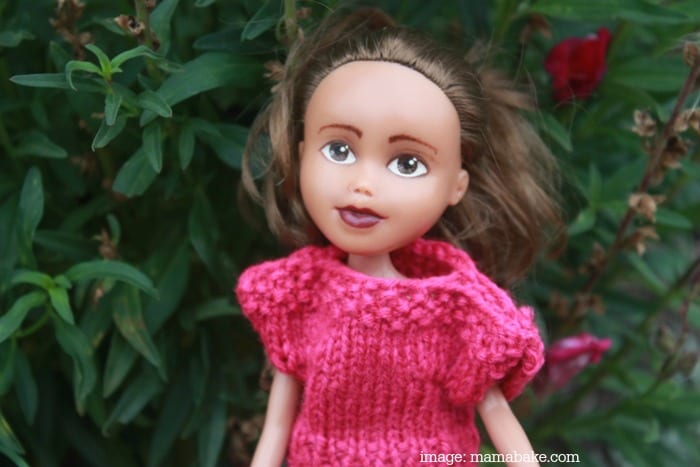 What was your inspiration to try your hand at making under the dolls?

Sonia Singh’s Tree Change Dolls TM were the initial inspiration. Showing my girls the photos of her dolls and seeing their excitement and joy was all the push I needed to actually do it. 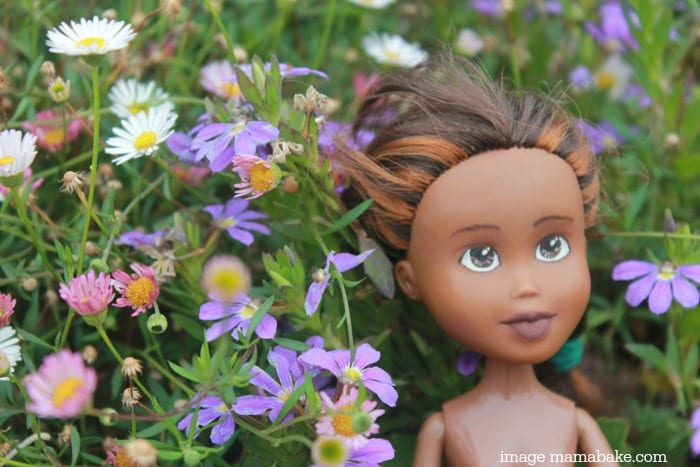 As a Mother of young girls, what are your thoughts on the dolls currently on the market?

I feel disappointed and frustrated.  I feel let down that we haven’t made much progress in the gender stereotype front. This is not what I want for my children. I want them to be children. Let 6 be 6. Not 6 going on 16. Breasts and makeup and clothes and sex will (& should) come much later. I have chosen to not buy Barbie etc as I don’t like the image they represent. That’s my/our choice/decision. That’s what’s right for me and my family. I’d happily let them play with dolls if I could find one that represents them. Something that they can role play with as a direct reflection of themselves. Not with a warped body image. 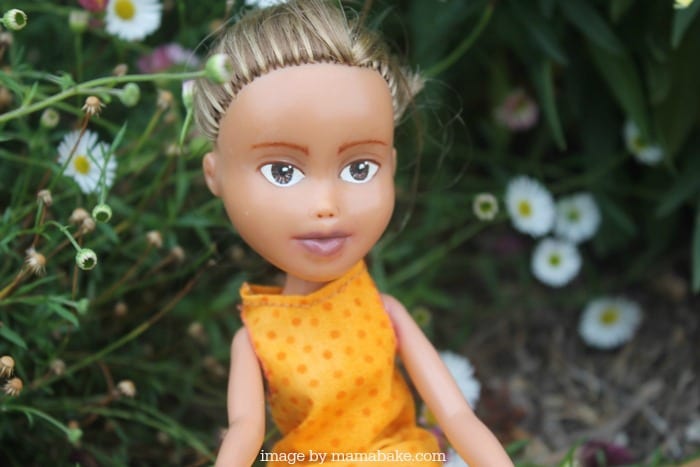 How did your girls react to the ‘before’ dolls?

My eldest (6) likes ‘pretty’ things so likes the makeup on the ‘before’ dolls. But, she also said that they don’t look like her or her friends or anyone that she’d ever met.  She told me it would be nice to have dolls that look more like her.  My youngest, (3.5) said that some of the dolls were ‘scary’ and it would be scary to meet someone who looked like that. 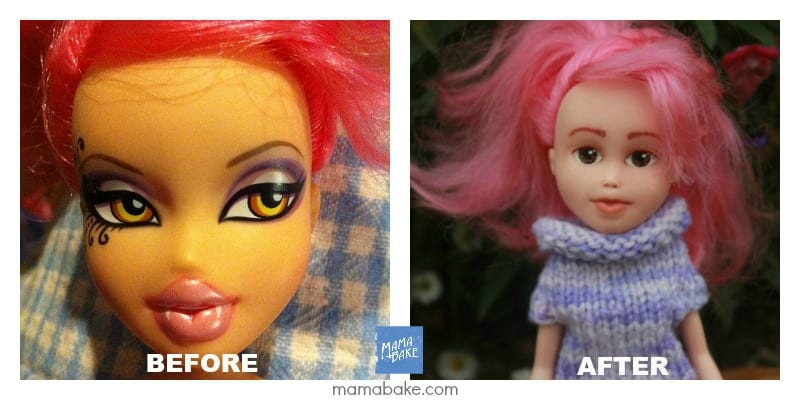 Both girls said that they look more friendly now. Very normal. I love that they also said that they looked prettier now.  ‘Wow! She looks awesome, mum!’  was the initial reaction when I showed them the first one I made.  Interestingly, the way they play with the dolls has changed a bit. When the dolls were in their original form, the play was more fantasy/princess/shopping/adult.  Now, the play is more down to earth and a reflection of things that they actually do themselves in real life. I was surprised at just how different the role play games became.  It cements for me that exposure to these dolls absolutely influences our young girls and the way they play; which in turn gets imprinted somewhere in their minds and pulled out when they’re older and starting to be in positions of peer pressure etc.  I’ve had a few requests from friends and everyone is very enthusiastic and positive. Seeing the pre & post make under dolls side-by-side gives the best impact and does make you question why the originals are so over-done. 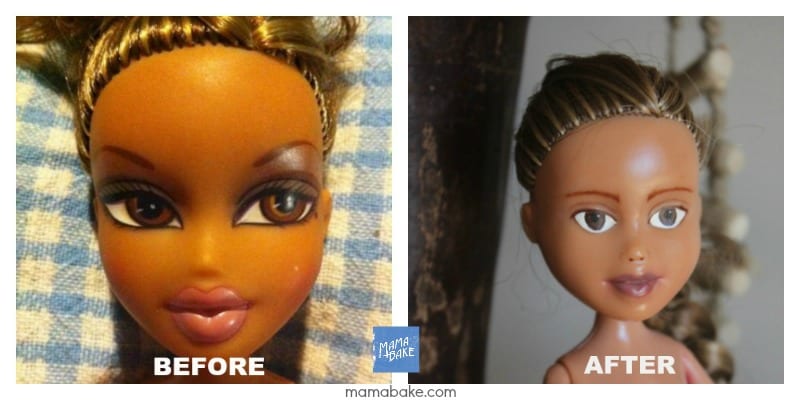 What was the most challenging part of the make under?  The weirdest?

The most challenging aspect was working with the features already there. Trying to make them look like kids when the dolls have breasts is a bit of a hurdle for me. That and the massive lips.  The weirdest features would definitely be the ridiculously huge feet and inappropriate clothing/ footwear. And no nostrils! 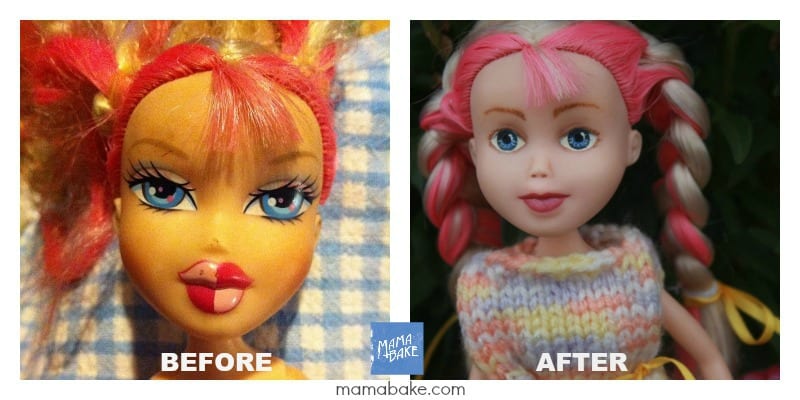 Any tips for anyone inspired to have a go? 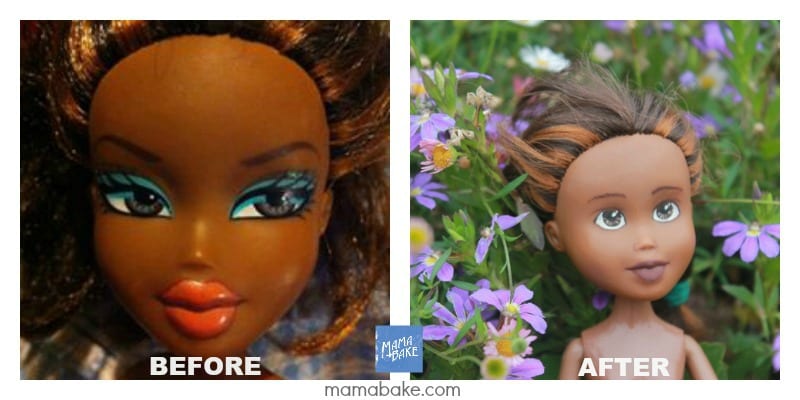 What about usability?  Can these rescued dolls withstand play?

We are in the testing phase. Although sealed with varnish I suspect you could remove paint by scratching with something hard. But that generally doesn’t happen with my kids so I’m not too worried. I also feel that there is not much point in redoing them if they can’t play with them. 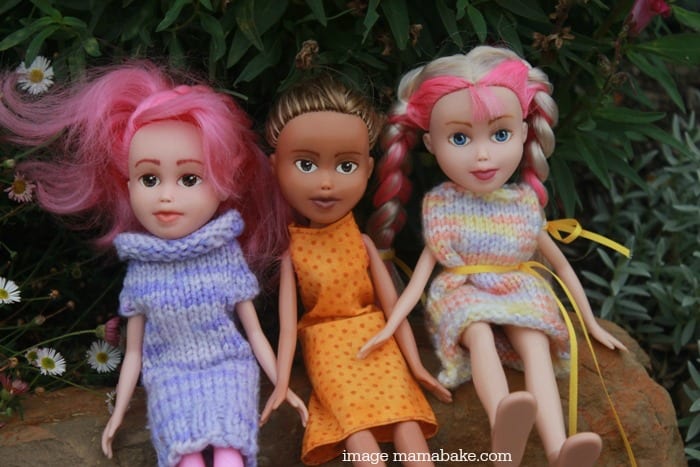 Tell me about the very special doll you’re currently working on.

A high school friend of mine had a daughter 18mths ago, Sophia.  She was born with Sturge Weber Syndrome. It’s a very rare condition. She has a large birthmark across her face and down the left side of her body. She has developmental delays and suffers from epileptic seizures. I knew nothing of SWS prior to Sophia. Her parents are so positive, driven & loving.

I wanted to make the doll for the same reasons I’ve made them for my girls; giving her a doll that represents her.

Just As she is. 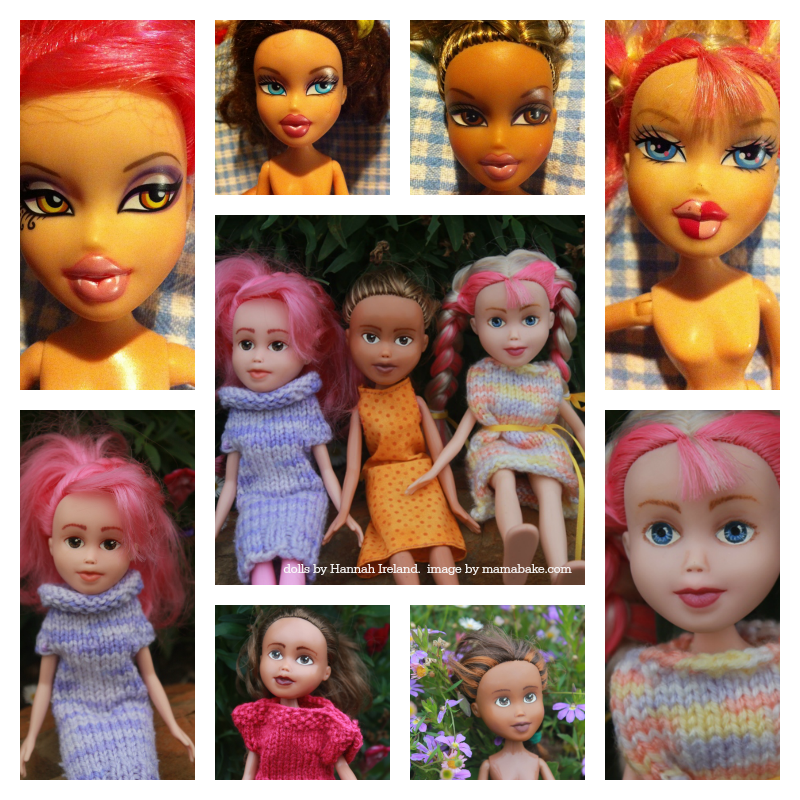 Hannah is currently working on these dolls for friends and family, but, if you are interested in having a doll make under done for your child, you can email an expression of interest to me, karen@mamabake2.wpengine.com. Alternatively, you can show your support of what Hannah is doing, by heading over to the ‘Sauce Ya Face for Sturge Weber Syndrome’ facebook page, reading Sophias story and maybe even whacking some sauce on ya’ face to bring attention to the syndrome and to help Sophia’s family make it on to the Ellen DeGeneres show!  I got saucy this afternoon! 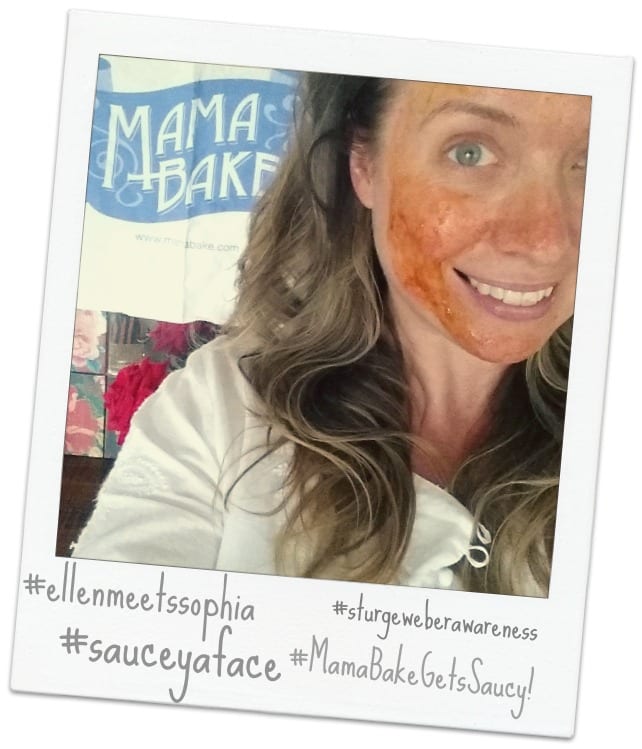 *disclaimer:  these dolls were sourced from op shops and may not be original Bratz dolls, but imitations or similar brands.