So mamas, it’s fast approaching that time of year (already):

The Christmas tree is looking wilted, it’s time to mothball the tinsel, the hangover is setting in and many of us are feeling as deflated as yesterday’s New Year’s balloons. And then…

Post-Christmas buyer’s remorse: if there’s a more demoralising way of beginning the year, I don’t want to know about it. We all know the feeling, don’t we? When we’ve bought a few things we shouldn’t, and it was all fun and games until the reality hit: there’s a cost. Debt drains us, not just financially, but energetically. Time is money. Energy is money. Debt enslaves us.

I’m not saying debt is inherently bad. It serves a purpose. Imagine, though, if you were able to minimise that debt, freeing up money and possibly time. This has been my goal for a while now, and while I’ve not been perfect, I’ve learned a few pretty cool things along the way. What if you reached next Christmas with credit cards paid off and money set aside? What if you were able to cut your work hours and enjoy more family time, without living like a pauper. What I hope to do is support people who want to take control of their finances and have fun in the process. Why not make 2014 the year that you make your money work for you, rather than the other way around?

Let me introduce myself. I’m ‘Frugal Frannie’ (ok, that’s not my real name) and I’m a mum struggling with all that grown up stuff like work and money, just like you. One day, I was reading an article in Reader’s Digest at the doctor’s when I read about the false economy of buying the family a meal at McDonalds. While this might appear to save working parents a truckload of time and energy, it also costs maybe an hour’s wages. This translates to an hour that could be used to cook a really nice meal. Something clicked. I realised that I had become trapped by this crazy cycle of paying a premium to save energy and time that actually ended up costing more than it saved.

At that point in time, I was a very overworked single mama who did buy an awful lot of expensive take away food. Hell, who can blame us mamas for doing that? Who wants to come home and get all Nigella Lawson after a slog of a day? Because I tried to be healthy, I spent even more than what I might if I went to McDonald’s. My whole life had become an exercise in chasing my own tail, piled up housework, parental guilt, leaky purse and incontinent spending. I realised that it was a trap and I knew I needed to change.

I decided that my priority in life was a nice lifestyle, not keeping up with the Joneses. I wanted more time to be a parent, cook good food. I knew I wanted to work less and I also knew that in order to do that, I needed to cut back on spending. I cut the credit card in two (that’s not for everyone) and vowed to do whatever it took to reclaim as much of my life as I could. Since that time, my spending and my life has drastically transformed. I have become a lot more clever about life and now save myself energy AND time. I made it a goal to do so. I embraced frugalism, and it worked for me. I have not looked back. 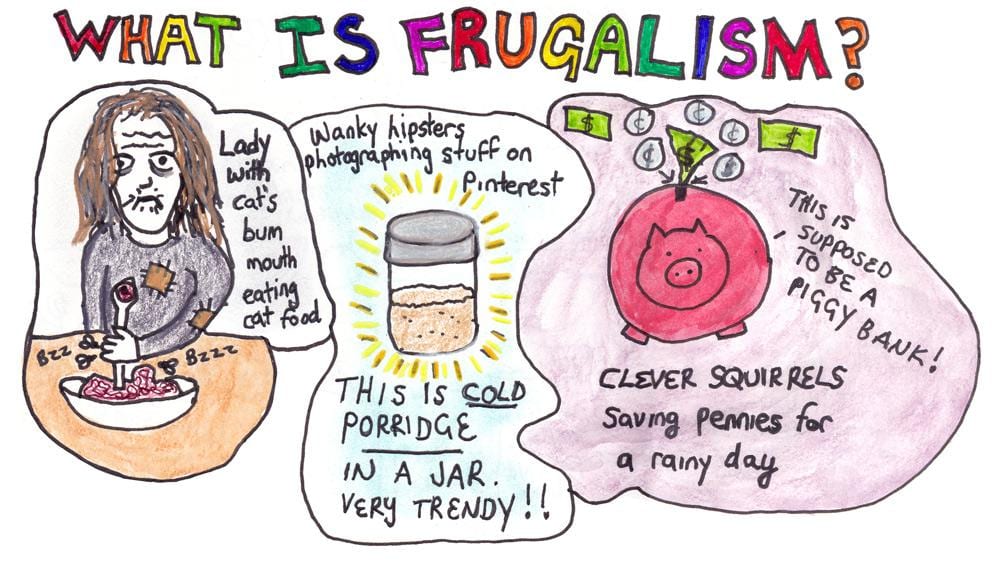 Here is what I think. It doesn’t matter whether you are a no-frills mama or if you think luxury is a necessity. With a bit of cleverness and nouse, everyone can make changes that will vastly boost their bank balance. Over the past several years, I have become a major league frugal living enthusiast, and as a result I have built up a series of practices and habits that have empowered me to do some pretty cool things, despite my rather limited budget.

I am passionate about frugalism; not because I am a sack-wearing skinflint, but because I like the freedom of having more say in where my money goes. For me, life has never been so luscious or soulful than when I began to create it as I wanted it, to direct my cash and siphon into the things I truly dreamed about. Whether you are going through a rough patch or just want more money in your holiday savings, I believe I can help.

Over the coming weeks, I will share some of the ways that I have saved myself thousands of dollars and funded a number of adventures and projects. I believe most people can adopt some of these and still live abundantly. All of us can enjoy the freedom that those savings can bring, whether it means working less, worrying less about money, saving for a holiday, saving thousands in interest on a mortgage or not becoming destitute every Christmas.

So, frugal living. In a sense, I was fortunate to have roots in the lifestyle so I knew it was doable. My parents were very frugal people who created a whole lifestyle around minimising spending. They grew enormous fields of vegetables, bought lentils and rice by the sackful, slaughtered their own meat. We wore op shop clothing and hand-me-downs. Mum sewed patches on things.

In part, this was the norm for many working class people in the late 70s and early 80s, before sweatshops and cheap labour drove clothing prices down. Back then, it was perfectly normal to buy shoes a couple of sizes too big for kids to ‘grow into’. I remember it being quite normal to begin the school year in a shiny pair of shoes that looked vaguely clownish. By the time our feet grew, our shoes were often too scuffed to pretty up with shoe polish. Most of the kids I knew wore hard-wearing corduroy pants with faded, thinning lines around the cuffs where they had been taken up or down. Clothing was passed around families and was not discarded until it was completely clapped out. I even remember my mum darning socks, for crying out loud. Op shops themselves had slim pickings. Clothing generally did not make it to op shops unless it was hideously ugly and unfashionable or utterly worn out. When did I become the old person who started talking about my youth in this way? 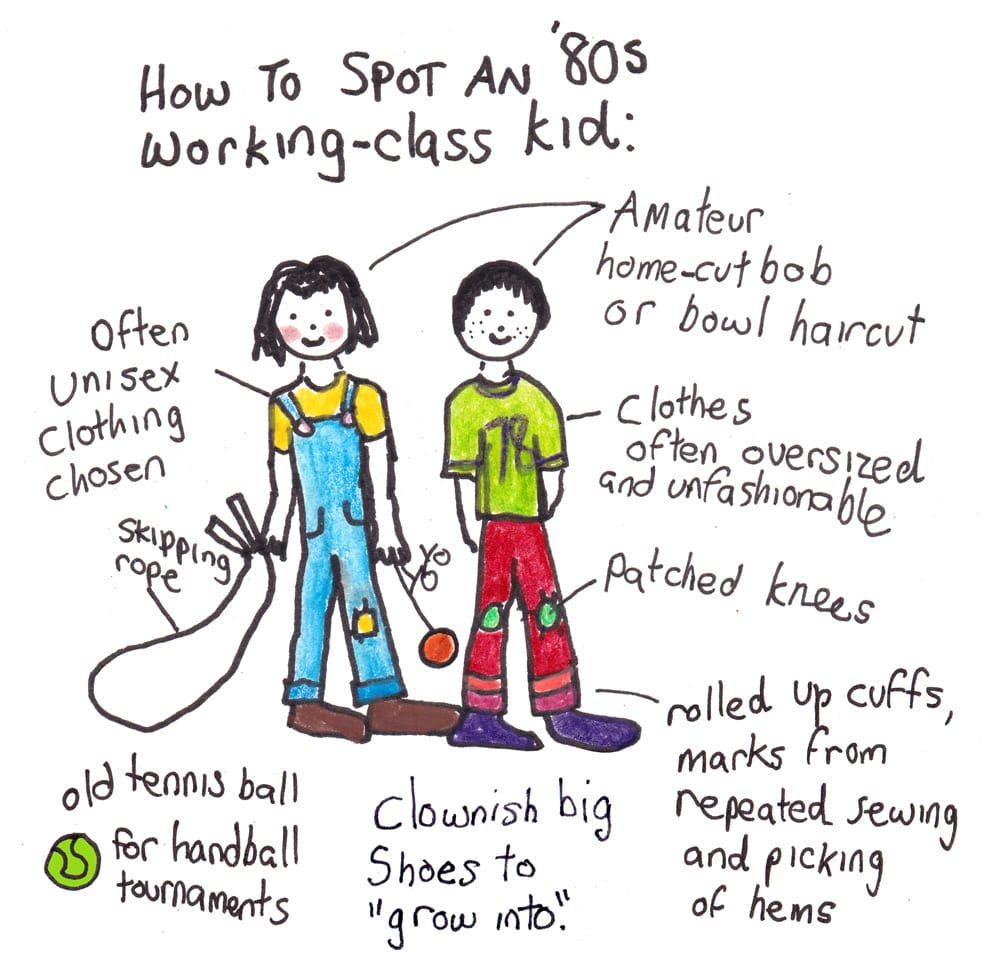 Modern Frugal Living: what is it?

Fast forward to now, 2013. Most people think nothing of popping into K Mart and picking up a few $5 T Shirts for their kids. In fact, many kids’ drawers are actually overflowing with clothing. I know that’s the case in my house, even though half of it is getting too small. Dang, child, can you stop growing for a bit? Cleaning out your closet is exhausting!

These days, more clothing is donated to charity shops than they can possibly handle, and in some cases the REALLY bad stuff (including rags) is actually shipped back overseas to poorer countries. Either that, or it is simply dumped in landfill. Given this glut, I have found it is easy to find clothing that is reasonably socially acceptable at local op shops. I find children’s clothing is particularly abundant. Although it isn’t well-made, it has often barely been worn. In this sense, the old frugalism my parents had is dated.

Nevertheless, living with cheapskate parents, I have been known to darn the odd sock or make my kid wear pyjamas that come halfway up his calf because they still fit around the waist.

I come from cheapskate stock and this is not insignificant, apparently. Tightwad parents beget tightwad offspring and big spenders beget big spenders. If we are to believe the results of many studies on genetics, it is just about impossible to live like a miser if you are more naturally someone who appreciates the finer things in life. Does this mean that those of us who enjoy extravagance must live and work in eternal servitude to our credit card debt? I think that’s the number one thing each of us must consider: how much of a skinflint are we prepared to be? For me, I do enjoy luxury. I am not interested in counting squares of toilet paper or lighting candles every night to save electricity. I love good food and all pleasures of the senses, and I don’t think I could stick to any lifestyle in which I was forced to give these up. My trip is all about devising as much sensual trickery as I can to give myself the proverbial champagne lifestyle on a beer budget.

There are loads of books around about the terrible impact of affluenza. We all suffer from it to varying degrees. Much has been written about maxed out credit cards and overflowing wardrobes stuffed with ugly impulse buys, children’s rooms cluttered with broken, cheap toys. According to Foodwise, the average Australian household throws out $1036 worth of food every year, weighing a whopping 523kg! Most of this is food we have forgotten about in the fridge. While many of us can afford to waste it, wouldn’t we rather have that money for other things?

Do we even want to think about the cheap two dollar shop cars with missing wheels and other rubbish toys that end up in landfill? And seriously, what kid wants to play with these crappy toys, anyway? Not only do they rob the quality of life of the thousands of workers who earn a pittance making them, not only do they clutter our houses and get broken in no time, but they pollute the planet from the moment they are raw materials being mined or mixed in chemical vats until they land in rubbish piles, where they will outlive us for millions of years. I call bullshit. I’m trying not to go all preachy on you folks, but I’m so passionate about this, it is hard NOT to get on a soapbox. It’s insane.

My aim is to convince as many people as I can that frugal living can be a very rewarding hobby, it needn’t feel like denial and it can actually be a whole lot of fun.

Are you a penny pincher too? Write to me (via: mamabake@mamabake2.wpengine.com)! I’d love to hear what you are doing. I’ll even write an article about you!

Frugal Frannie is a fictitious character based on a real-life mama who loves nothing more than to pinch a few pennies. She’s a saver, socially responsible and a bit of a greenie, with a strong interest in the DIY movement.

Over the coming weeks, she will share frugal tips on all sorts of things, including family entertainment, budget date nights, dirt cheap gardening, home maintenance, setting up a frugal craft cupboard, luxury on a budget, cheap entertainment for kiddies, tricks to curb the spending urge and more.