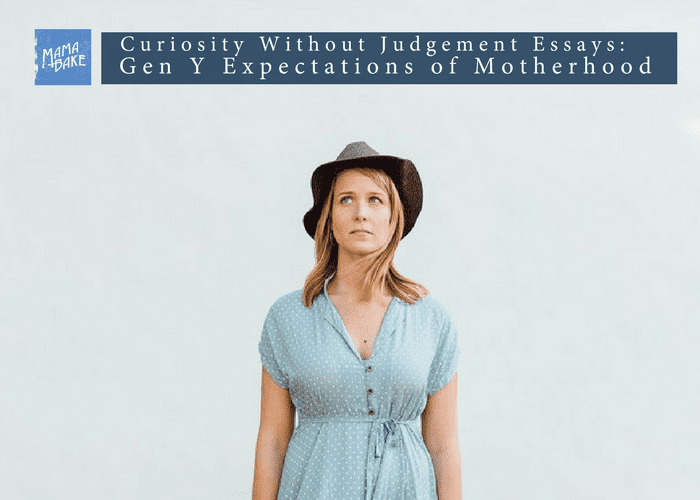 Some of you might find it a little strange for a single, childless woman in her twenties to write about motherhood, but stay with me. While children aren’t on the cards just yet, I am getting to an age where I am becoming aware of the challenges mothers face in our society, and it does get me thinking about what I would want my experience of motherhood to look like. What does strike me when thinking about becoming a mother is that despite all the leaps and bounds that feminism is making, women are still saddled with most of the domestic labour. Of course, none of this is news to everyone at MamaBake, but for me it certainly plays on my mind when considering my future. Despite the fact that I am still relatively young and am unlikely to be starting a family soon, I am already considering how my life may look; how I want my life to look, when I do have children.

At 24, I am only just starting to really figure out what I want to do with my career. Having recently  graduated from university I’m still figuring out what my passions are and working out how I can try and shape those passions into a career. Although women do still face a lot of disadvantages in the workplace, historically speaking I am in a pretty fortunate position as a woman in Australia in 2017. At this point, I am feeling relatively optimistic about my future career. Being single and childless I can afford to focus most of my time and energy on pursuing my career and creativity. This is probably the only time in my life that I will have to be wholly self-focused. When I start to imagine what my life would be like when I have children, something that is important to me is that I will still in some way be able to pursue these passions.

Something I am already keenly aware of in my current life, which I am sure I would be likely to feel as a mother, is the kind of “having-it-all” mentality that is so pervasive in our society. I fell as though this is pushed most often onto women. There is an expectation that we all should be able to have a career, have a happy family, have a perfectly maintained house, engage in an active and fulfilling social life, etc etc. What I am struck by is that, all these things sound nice, but women seem to always be put in a position where it is all up to them to achieve these things, and it is this that seems completely ridiculous to me.

A lot of this pressure still exists because society is still struggling to find a way to truly support in their pursuits of both raising children and successful careers. I am hoping that when I have children, society will have found a way to support women in BOTH their career pursuits and the raising of children. The stumbling block I see in the world at the moment is that I hope to be able to breastfeed my children, which means that I would want to keep my child with me most of the time for the first two years of their life. This then has the potential to make many types of employment very difficult for those two years. What I would love to see is for society to come up with some better ways to support women during this time.

MamaBake is one group who are already tackling the issue of domestic labour, freeing up time for women to pursue their passions, but wouldn’t it be amazing if all of society thought about domestic labour and motherhood the same way? Finding a way to allow women to fully commit to motherhood while at the same time allowing them to pursue their careers or passions. What I would love to see when I have children is to have found an employer who could support my ability to keep my child with me, either by finding a way for me to work from home, but equally remain plugged in to the workforce. The advent of technology has allowed for a lot more of these kind of opportunities, but it would also be great to see more workplaces finding a way to allow mothers to keep their children with them while coming to work outside of the home.

Supporting mothers more in the workplace would also, I hope, help to minimise some of the isolation that a lot of women experience when they have children. I have seen that a lot of women end up feeling cut off from the rest of society after having a baby, where they are mostly left to be by themselves at home. There are certainly a lot of measures that need to be taken to make bringing infants into the workplace a practicality, but surely with a bit of thought we could figure these out? And I know that a lot of people say the sounds of infants crying causes them discomfort, but doesn’t this idea have its roots in a misogynist understanding of the roles men and women have traditionally maintained (women staying home, men being the bread winners at work)? I know that there are a lot of hurdles to overcome here, but I can’t help but hope that I might someday get the opportunity to work in an inclusive and supportive environment.

One thing that does play on my mind a lot about raising children is to do with what kind of partner I will have. Something that we see increasingly in society is that it can be very difficult to maintain a healthy, happy romantic relationship over the course of a lifetime, including the time that would be spent raising children. Studies often tell us that around half of marriages end in divorce, and while I don’t think this is really the awful tragedy the media makes it out to be (surely two happy parents living apart is better than two miserable parents staying in an unhappy relationship?), it does make me conscious of the fact that choosing a partner to have children with is also potentially choosing a person to co-parent with, even in the event of the end of the romantic relationship. Relationships are always a lot of work to maintain, even when there aren’t any children in the picture, so I am keenly aware that I need to be very mindful of who I choose to be a co-parent with. Thinking logically, I like the idea of choosing someone as a co-parent more for our compatibility as friends who can raise children together happily, someone whom I can depend on to be a partner in the task of raising children above all else, rather than focusing on having a romantic relationship for all that time. That said, I am also aware that I am something of a hopeless romantic, and that logic might not always prevail when it comes to falling in love and choosing a partner. I do still hope that I can choose a partner who will support me as a mother no matter what.

One thing I would definitely hope for from a partner would be an equal division of the domestic labour. It seems crazy that women still do so much of the domestic labour, but as everyone here knows, that is still the reality of the world we are living in. I hope that in any future partnership I find myself in, the tasks of house and home will be negotiated and spread evenly, rather than the assumption that things like laundry, cleaning and cooking will just fall to me as the woman.

There are a lot of things that I think will be important to consider when I do have children, but it also does fill me with a lot of excitement. Knowing that communities like MamaBake exist certainly makes the prospect of motherhood feel a lot less daunting. As a naturally optimistic person, I hope that as I get closer to starting my own family the world will adapt and progress. And progress is afoot! This year we’ve already seen Senator Larissa Waters breastfeed her baby daughter in parliament. Seeing powerful women embrace their skills, passions and careers while also devoting themselves to parenting fills me with so much joy, and I can only hope to see more of it!

Jenna Maurer is a university graduate and aspiring writer living and working in Canberra. She has a keen interest in feminism and female empowerment, and is passionate about body positivity and combating the stigma of mental health. In addition to working full time, Jenna loves to read, write, drink coffee and collect beautiful clothes. She is also a contributor at Leiden Magazine, having written about topics from body shaming to the recent terrorist attacks in the U.K.