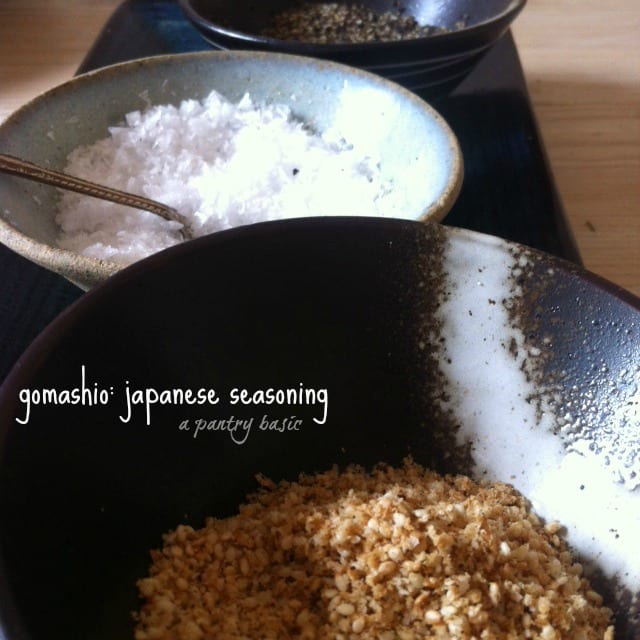 I keep this home-made seasoning with the salt and pepper next to the cooker. It’s often used in Japanese cooking, but I find myself sprinkling it over just about everything. Not only is it super-tasty, but sesame seeds are packed with calcium, zinc and protein.

Toast sesame seeds in a heavy skillet over medium heat, shaking often, until lightly browned (they will give off a wonderful aroma!).

Spread toasted seeds onto a paper towel to cool.

Pour cooled sesame seeds into a pestle and mortar and sprinkle with salt. Grind seeds until coarsely ground.

You can store gomasio in an airtight container in the fridge for up to 1 week- but mine never lasts that long!

Gomashio (also spelled gomasio) is a dry condiment, similar to furikake, made from unhulled sesame seeds(ごま, goma) and salt (塩, shio). It is often used in Japanese cuisine, such as a topping for sekihan. It is also sometimes sprinkled over plain rice or onigiri. Some commercially sold gomashio also has sugar mixed in with the salt.

The sesame seeds used to make gomashio may be either tan or black in color. They are toasted before being mixed with the salt. Occasionally the salt is also toasted. The ratio of sesame seeds to salt varies according to taste and diet, generally ranging between 5:1 (5 parts sesame seeds to 1 part salt) and 15:1. Gomashio is often homemade, though it is also commercially available in glass or plastic containers.

Gomashio is also a part of the macrobiotic diet, where it is used as a healthier alternative to ordinary salt. Generally, thegomashio used in macrobiotic cuisine will contain less salt than traditional Japanese gomashio (a ratio of 18 parts sesame seeds to 1 part salt is recommended for some individuals with a particularly restricted diet) and made by hand grinding in asuribachi. Source