I Am Femivore, Hear Me Roar!

“FEMIVORE – A homemaker who blends feminism and environmentalism and isn’t afraid to can her own tomatoes.
A femivore wants to provide for her family from her own backyard, while reducing her carbon footprint.” Peggy Orenstein, The New York Times

Over the past 18 months, I have become a backyard activist. I live in a rural agricultural area where, whilst homemaking is quite normal, reducing one’s carbon footprint is not a high priority for many.

Our evening TV shows are peppered with advertisements for pesticides trying to compete with each other in the wheat/sheep farming market.  Mention ‘organics’ in conversation at a social gathering and brace yourself for venomous debate, being called a hippy, or even (light-heartedly, of course) being accused of witchcraft. It happens, I swear.My eldest daughter reacts to additives. Instead of trying to identify and eliminate particular additives, we figured we would get rid of them all.
Anything that is so shifty that it can hide in our food and turn our children into monsters can’t be any good at all.

I began researching food, additives, organics, anything really…. and was taken down a merry path on the interwebs that led to so many discoveries, so much information, and the very sobering realisation that our bodies, our food, our communities and our Earth are all connected.
Like a hanging mobile, when one part of this intricate system is out all balance, all parts feel the effects.

I watched The Story Of Stuff. I read blogs, many good, inspiring blogs.
I became armed with all the information needed to become alarmed, very alarmed. I had a choice: curl up in the foetal position and wait for the end of the world as we know it, or engage on a
personal journey of change. Ever one to enjoy a good holiday, I chose the journey.
So, I became a Mama who baked. A mama who sews, gardens, preserves, buys organics, talks to farmers, rids her house of plastic, hugs trees, wears cloth, buys in bulk, shops through collectives, refuses to buy anything new, nurtures a sourdough starter, makes yoghurt, stills fermented wild yeast, plants according to the moon, discusses cow horns and compost with friends.
A mama who believes that the power of her spending dollar is power enough to make a change. A mama who believes that any change is a good change, as long as it is in then right direction.

I joined our family up to a community garden. I started an organic food collective with a good friend. I began a facebook page called The Whole Shebang, which is all about food – the growing, preserving, cooking, eating & learning about food; the community & land that our foods come from; the people who grow it; appreciating food in a way that doesn’t impact on others, or on the Earth.

I talk to people. Even when their eyes glaze over. In a community where women belong to CWA and the netball association, and men belong to everything else, I strive to make my voice loud enough to form ripples in the middle of the pond, ripples that may one day reach the shores and have everyone talking about the Big Stuff.As for canning my own tomatoes, all I can say is, my tomatoes bring all the boys to the yard. 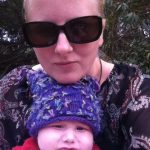 Nic Coleman is a thirty-something mother of three small ones who keep her grounded, busy, and surrounded by mess. She can usually either be found in the laundry pretending to be on top of things, or in the kitchen pursuing one of her two greatest loves – cooking, or eating the things she cooks. She is passionate about all things food and committed to minimising the impact of her existence on our Earth. She dreams of a society where we cook together, eat together, raise kids together and live out of a village mindset.