Make your own candied citron peel! . 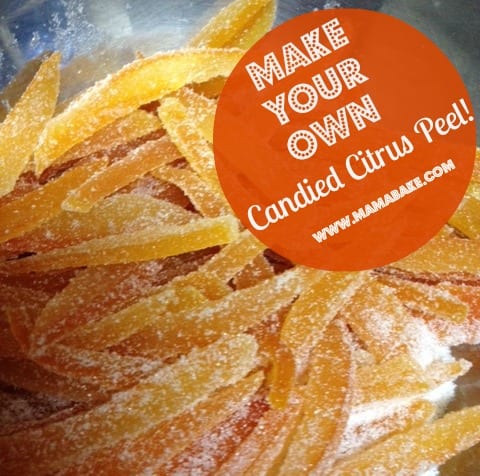 My waste saving and frugality is bordering on obsessive. I spend no more than $80 per week for our family of four at the Dandenong fresh food market in Melbourne. I try to make every cent count.

When it comes to fruit and vegetables, more often than not the stuff at peak season is also the cheapest. This week pink grapefruit were $2.99 per kilo, so I bought several. These guys were awesomely heavy with juice, so worth their weight in cost. The thing about grapefruit is that while we’re after the bittersweet flesh inside, these things have extraordinarily thick peel. Looking at the pile of peel on my chopping board versus the remaining globe of flesh, it looked like the peel comprised a quarter of the grapefruit’s overall size. Having been a head chef in a tiny commercial kitchen, I’ve been in charge of kitchen finances and have learnt to see value and potential in every little thing. Getting lectured for spending too much money on ingredients certainly drilled that in. With Easter coming up, hot cross buns are on the mind (and already in supermarkets, oddly), and just like at Christmas time, people start buying up kilos of currants, raisins and citron peel. Citron peel isn’t the most expensive stuff, but for most of the year until these two Christian holidays, it sits unloved and unwanted on supermarket shelves, in untouched peaks in market displays.

Candied citrus peel is ridiculously easy to make yourself.

Skin a couple of oranges – or grapefruit as I did – and eat the delicious flesh. This is the one time where all that white pithy stuff comes in handy.

Slice your pieces of peel into roughly 5mm wide strips.

Place in small pot and cover with cold tap water. Bring to the boil, and then drain the liquid.

Repeat this process twice if you’re using grapefruit as it removes the majority of the bitterness.

You’ll see that the peel is now more or less the same colour with no major difference between the skin and the previously white pith. It should also be more translucent.

Drain the peel and set aside for a moment.

Bring this mixture to the boil, add your peel and allow to simmer for 15 minutes. 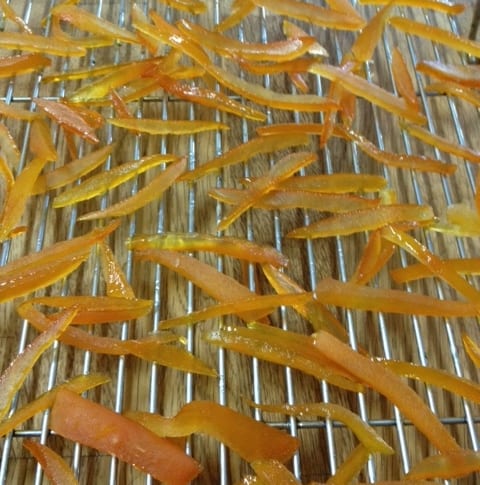 Drain peel and dry on a wire rack. Let this stuff drip and dry out an hour or so.

Now your citrus peel is ready to use for your cooking endeavours. It will have a stronger citrusy flavour and be less sweet than its commercially produced counterparts. The skin or just 2 or 3 citrus is enough to make this a worthwhile exercise. Because it is easily made fresh, your citrus peel needs less sugar to preserve it and you can make it as required for recipes. 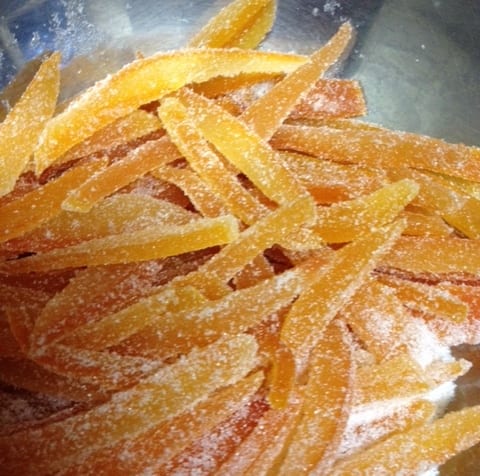 For this batch of peel, I used half of it for two dozen hot cross buns. The other half I rolled in fine caster sugar. This gives it the appeal of those old fashioned sugar coated jubes.

I then melted about 70 grams of dark 70% cacao chocolate and coated the crystallised pieces in it. Let the chocolate coated peel dry and harden on clean baking paper for a few hours. The bitter chocolate and bitter peel makes a nice combination. This makes an awesome home-made (and rather inexpensive) birthday gift. There is of course now a bowl liberally coated with a thin layer of now hardening chocolate. I hate wasting chocolate and I hate chocolate dishwater. To avoid this, add a mug of milk to the bowl, replace bowl over bain-marie or in microwave and allow to heat. Stir to dissolve chocolate into milk. Voila, you have yourself a hot chocolate. 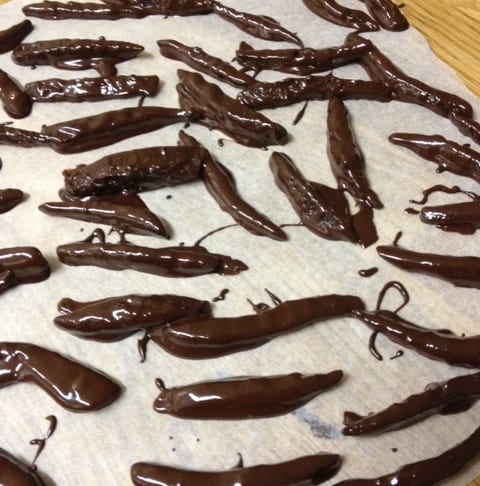 Taking waste-saving to the extreme? But from potential waste I now have fresh, home-made grapefruit peel, a birthday gift for someone I love and a hot drink.