Pack your bags! We’re going on a guilt trip! 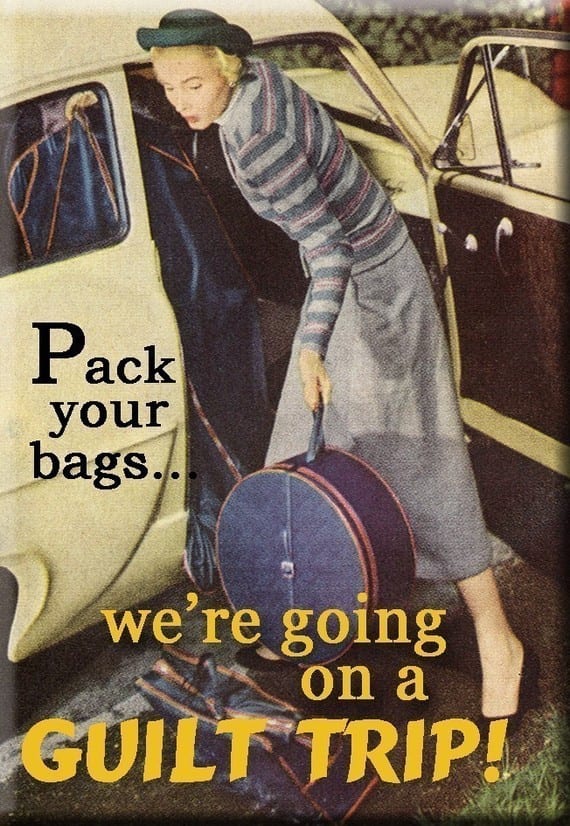 Ah, mother guilt.  Try as I might to stand by my decisions as a mother, I undeniably feel the insidious hands of guilt creeping into my mind at times of indecision or reflection.  When faced with so many life altering decisions, for you and your child, is it any wonder we mothers have moments of second guessing ourselves?

Let’s examine shall we?

For the first 12 months, (hell, how about the first 18 years!), I suggest taping an ‘L’ plate to your back, taking a deep breath and just put one foot in front of the other.  Deep down, you know you’re making the right decisions for you and your baby, but it takes a good 6 months to stop questioning them. How much energy must we waste feeling guilty? The reality is that there is no such thing as the perfect mother or the perfect child.  Average isn’t a dirty word.  We’ve all had a parenting moment that was less than glowing, even the people who won’t admit it.  Our babies are only concerned that we love them.  That our eyes light up when we see them.  Take the energy away from guilt, channel it into love and do what feels right.

Me, I’ll save the guilt for that family size block of chocolate that never stood a chance………..or not…..Guilt, be gone!