Review: The Vegetable Spiraliser (NOT sponsored) 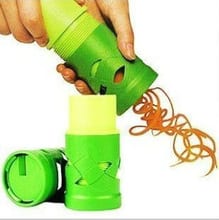 You know by now if you’ve been around the MamaBake HQ traps that we love to experiment with different foods and creating fun alternatives for our members (join here for the movement and here for our online Big Batch Baking Club).

When we stumbled across the vegetable spiraliser we were intrigued.  Karen had bought one a few months ago and had worn it out after a month.  I rather loved the idea of turning sweet potatoes and zucchinis into ‘noodles’.  It looked to be a welcome change from steaming or baking them.

I started to keep my eyes peeled for one of these contraptions and after a really good hunt around my nearest big town, eventually found a small hand held one.

I couldn’t really figure it out at first and the kids had a marvellous time fiddling around with it.  It is bright green and looks like a fun toy so the kids were very attracted to it.

Karen’s thoughts on it:

Spiralise your sweet potatoes.  Bring a pan of water to boiling.  Drop in your noodles for one minute. Drain, and dot with butter and ground black pepper and that’s it.
I did a container load up once (my poor wrist!) and had them in the fridge for when the kids were hungry.  Super quick, healthy snack.