The Curiosity Without Judgement Interviews: The Young Mum 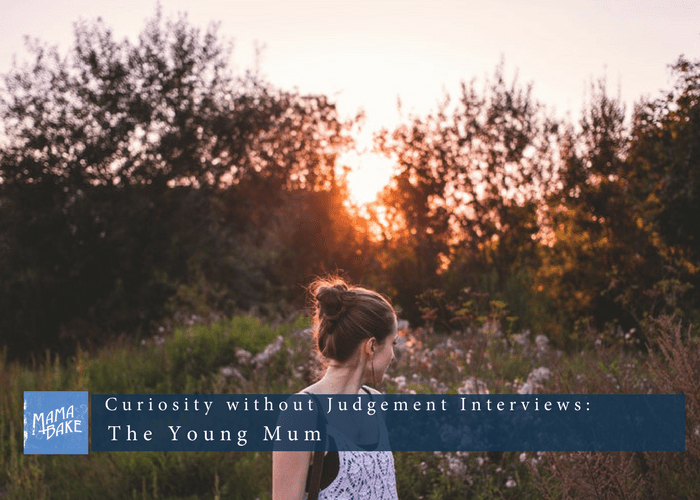 Think about when you got pregnant with your kids, and the reactions that you received. Chances are, unless you actually expressed mixed feelings, most people would have congratulated you. How would you have felt if someone expressed concern about the pregnancy or asked you whether it was a mistake?

This actually happened to “JD”, who became pregnant in her late teens. A university student and accomplished musician, she juggles the responsibilities of her life with having a 3-year-old daughter, but she feels that she is managing as well as anyone. Yet, she still struggles with the stigma of having a child so young, and the media-fuelled assumptions around early parenthood.

JD has frequently felt the effects of social stigma that lingers around teen pregnancy. She said during pregnancy she was inundated with unwanted advice, and weathered more than her share of disapproving looks and comments from friends, in-laws and health workers.

“I just let it slide as I really didn’t want to argue with them,” she said.

“It does really peeve me off though that there is such a bad stereotype around young mums… people seem to assume young mums are automatically bad mums, which I must say is the complete opposite to what I see with most young mums.”

I interviewed her about her experience of getting pregnant at 19. “Lets just say that no one was particularly thrilled to hear I was pregnant,” she said.

Mostly, the disapproval was subtle, but one person overtly asked her if she had meant to fall pregnant.

“I looked at them rather dumbfounded and was speechless,” she said. “Once I regained my voice I said it didn’t matter either way; that I was having the baby and she or he would be loved no matter what.”

Nobody would argue that becoming a parent is easy or without a degree of sacrifice. It goes without saying that in today’s world, young Australian parents will be up changing nappies while all their friends are out at parties and having the kinds of adventures that become out of the question once children come along. However, age does not necessarily make this transition easier, and youth does not necessarily make it more difficult. Many other factors come into play, including personality and probably most importantly of all, social support. JD had plenty of that.

“I’m just really lucky that I have two best friends who still like hanging out with me even though I have a child,” she said.

“I also have a really supportive family- without my mum I would truly be lost.”

Even so, JD had a difficult time when it came to other mothers. In fact, until recently, she did not have any friends with kids. She remembers attending play groups and other functions and being ‘about 10 years younger’ than all the mothers, feeling that they had nothing in common. She felt that many of the mothers saw her as being somehow less capable or experienced because of her age. She said the other mothers showered her with unsolicited advice and she could not relate to them.

Like most mums, JD has her doubts about being a parent, but overall, she is confident that she’s doing a good job.

“I feel confident in the aspect of knowing what my child needs, however there are times I completely lose my confidence and ask mum if I am doing it right,” she said,

“But really, is there any ‘right’ way to parent? If your child is healthy and happy that’s the main thing. I may not have as much life experience as older parents but without knowing my story or background you can’t assume I have no experience with children or that I’m less equipped to be a parent. Also, just because I’m young doesn’t mean I want or need you telling me what to do with my child.”

Damning or gloomy pictures of teen parenthood are a dime a dozen, and begin from the time of conception.

A quick scan of the support services available online for pregnant teens offers page after page of advice on how to deal with negative reactions. There is a common assumption that the child is unwanted and the parents-to-be are implicitly asking for family planning advice when they announce their pregnancies. Yet, about 50 per cent of teen pregnancies end in the birth of a child. Not all of these are planned, of course, but many teens make a conscious decision to have their baby. The decision to have a baby is huge, but so is the decision to have an abortion. Neither is easy, and the choice is very personal. Age is far from the sole defining factor in choosing not to continue a pregnancy. In fact, according to a recent article published in The Telegraph (UK), the highest number of abortions are performed on women aged between 30 and 34.

Researchers with the World Health Organisation estimate that 16 million women aged between 15–19 give birth every year. This is 11 per cent of all births worldwide. The proportion of births that take place during adolescence is about two per cent in China, 18 per cent in Latin America and the Caribbean and more than 50 per cent in sub-Saharan Africa. Half of all adolescent births occur in just seven countries: Bangladesh, Brazil, the Democratic Republic of the Congo, Ethiopia, India, Nigeria and the United States. While the World Health Organisation itself frames this as a problem, it also points out that mothers fare better in environments where they have good social networks and support.

To see this in action, we need only look into our own cultural past, when having babies in one’s late teens and early twenties was the norm. Yes, those who did so out of wedlock were made to feel like social pariahs and had their children quietly removed, but for those married young women who had babies, a supportive culture and predominantly Christian value system meant family breakdown rates were much lower. This suggests that culture, not age is what places strain on families.

A large number of studies published online propose that social isolation and poverty present bigger risk factors than age, for parent and child alike. Sociologist Kristin Luker refutes the notion that teen parents get pregnant to receive benefits, arguing this puts the cart before the horse. The real problem, she suggests, is the lack of support programs to break the poverty cycle.

A young parent with poor family support and few services at his or her disposal is going to find it difficult to get an education or training. For this reason, Kristin claims, young parents are often poorly paid, with insecure employment, and this trend lasts for the span of their working life. They also tend to enter the workforce later than their peers, making it difficult for them to compete for jobs. Programs enabling young mothers to continue at school or further their education and training have proven enormously successful in ensuring stable housing, better paid work and lowering dependency on welfare.

Even so, public condemnation of young parents is common. Politicians talk about introducing programs to reduce the number of teen pregnancies. Current affairs programs paint damning pictures of single parents blowing welfare cheques on junk food and cigarettes. Pregnancy among the young is almost always portrayed as being a terrible disaster.

There are countless lobby groups that work tirelessly to curb the number of early pregnancies. Leading organisation, Do Something.org offers a list of bleak statistics, claiming pregnancy is the leading cause of school drop-outs, and that most teen mothers will never get a degree. Scroll down, and the page is filled with angry comments from young people who have not only become excellent parents, but who have seen their kids as an incentive to work harder than ever to create good lives.

Like every mother, or every human being, really, mums like JD want respect. Like the rest of us, they thrive when people support (or at the very least respect) their choices and withhold judgment. There is always more to every story than what is visible to outsiders. In fact, genuine interpersonal and social support is key to the success of all families, and especially those facing stigma, like young parents.

The Telegraph, ‘Why do Teenagers Really Get Pregnant?’ August 19, 2013

Do Something! 11 Facts About Teen Pregnancy.
http://www.dosomething.org/tipsandtools/11-facts-about-teen-pregnancy