Thermomix: Do they really stand up to all the hype? 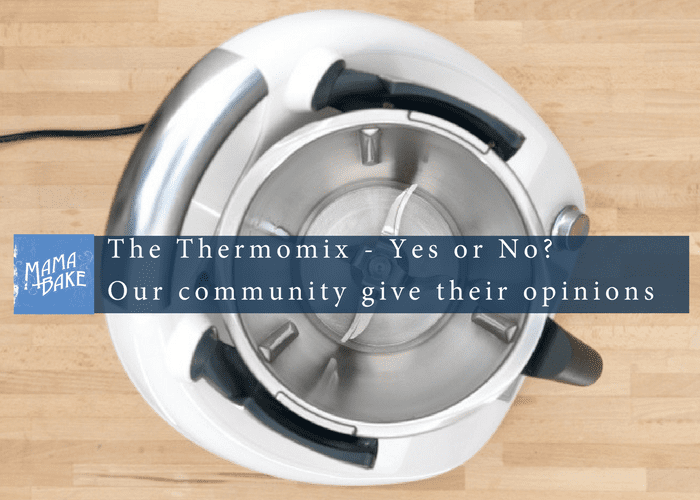 Here at MamaBake HQ we receive a large number of emails from Mums asking us what we think of the Thermomix, asking us if we think they’re worth the money, asking if we can ask our community what they think of them.  We decided to write this post as a one stop, and hopefully, balanced post that presents both sides:  the many undeniable advantages to owning one (see the Facebook thread – link further down) versus the things that we don’t hear so often: the things that don’t work for Mums.

Neither Karen or I own one of these machines so this article is based purely on anecdotes from Mums and from a fascinating Facebook thread we ran last year asking Mums to tell us about their experience of owning one of these appliances.

Fiona has one and she says:

“The best money I ever spent, it took me two years from seeing it at a demo to being able to purchase one but it was definitely worth the wait. It is so easy that my 11 year old has been using it! I have made so many things that I would have never tried before because I thought they were to hard but they were super easy with my thermomix. It is so quick that I can get up an hour before school and still make a batch of cinnamon scrolls and an Anzac slice for coffee at our school assembly!

If you buy a thermomix you also get a quality consultant who can give you recipe ideas, tips and hints and they also offer cooking classes to show customers new things they can make with their thermomix, all these things don’t come with the cheaper versions. I love it so much that I take it camping with us as we’ll. The best way to decide for yourself though is to go to a demo or two or three and see for yourself what it can do.”

I only heard about the Thermomix in recent months even though it’s been around since the 1960s.  As I said, I don’t own one and this is NOT a sponsored post.  Karen and I first stumbled across Thermomix along our MamaBake journey fairly recently.  We were surprised by how evangelical people were about it.  We don’t see people waving the Cheese Grater flag or shouting the praises of the Potato Masher from the highest steeples; no, this was so different.  How was the Thermomix so different to all the other appliances?    We got real curious.

Is it to today’s modern mother/woman what the fridge was to mothers/women back in the 50’s?  Is it really this incredible, labour saving device that would free women from their kitchen shackles?

Mums’ Honest Review of the Thermomix

MamaBake ran a thread on Facebook last year that asked Mums who have a Thermomix to tell us honestly what they thought of it – to tell us the good, the bad and the ugly.  We had a fantastic response with a great range of answers.  We asked that no consultants comment so that the thrust of the thread was based on the users’ experience (though, as one woman pointed out:  yes, she is a consultant but that’s because she loves the machine so much, not the other way round) so that those who were genuinely curious (and had the coin) could make an informed decision based on genuine feedback.

The overwhelming response was really positive (read the thread to see) but what also came out was that women found the Thermy noisy, it’s capacity restrictive, a bugger to clean, expensive and sometimes Thermy owners weren’t really sure how to use it properly and therefore get their money’s worth out of it (however, I understand that, if bought in Australia, consultants will educate the user through the processes.  I also understand that they like to demonstrate it before it is bought so that the new owner can get the most out of it).

We also heard from mothers with one or more little children who swear by it at cyanide o’clock when they can chuck in the ingredients and it will chop and cook and stir while they tend to their small children instead of battling between stove and lego.

So if I was to buy a Thermy that means I can dispose of the food processor, the ice cream maker, the bread machine, the flour grinder, the grater, whisker, juicer and scales (I certainly don’t own all these things), yes?  But:

1/ Do we all even have all those appliances to replace anyway? And do we use them all enough to justify the price tag of a Thermomix?

“Is it still worth its $2000+ price tag when you already own every other appliance known to man? Most women already have a slow cooker, food processor, bread maker, ice cream maker.” Maxine

“I have had a Thermie for just over a year. I love it BUT I do not use it to its full potential. It is mostly used for making mango sorbet or smoothies by the kids. I use it for chopping/ grinding but still use a grater or food processor for grating/ fine slicing as you can do it in the Thermie. We use the Kenwood mincer for mincing meat and the Mixmaster or baking. I make sauces in the Thermie and custard, soups. I steam veggies & puddings in the steam attachment but find with 6 of us it is just not big enough to make a complete meal in it.” Shiralee

2/ Could we not save the money by just doing that ourselves with a bit of good, old elbow grease? As Tenille says:

“I cant justify spending that much on a machine. I’ve managed so far without it. My sister makes everything from scratch, organic, vegetarian, and she’s never needed an expensive machine. I can make everything it makes, just might take longer and I don’t have to spend $2000. I have more important things to spend that money on.”

3/ What of the soul of cooking?  Or, is it a labour saving device that should be held up as the 21st century Liberator of Mothers from their Kitchen (meat) Balls and Chains? As one mother said:

“I love the romance and process of cooking, like the gentle “clunk” of the wooden spoon on the pot. I have never used it (her Thermomix) again.”

“I tried the food/went to a party. Found the idea great, fabulous for people who can’t cook, or have no time, but didn’t like the taste of the food that much (I’m a total foodie) and found the food really soulless. My dad used to stand over his cooking for hours and his food was amazing, even with the tight budget we were on as kids.  I want them (my kids) to SEE somebody cooking their food.”

It would seem that it really is worth the money for those families with food intolerances, allergies and who require specific diets.  As Katrina says:

“(It) saves me a tonne of money on things like specialty flours (spelt etc) as I buy the grains & mill myself not paying the ridiculous prices you do at health food stores etc for flour that is already rancid. I make dairy free milks (rice, almond & quinoa) without the $4-$8 price tags for 1 litre & can make everything else from scratch with minimal effort required which is a godsend with young kids & a business to run. No packets in our house, less stressed mummy with more time to make nutritious healthy food with minimal fuss. It’s a lifestyle choice I wouldn’t be without!”

Carmen has been using one for years and now has two for her family of between six and nine at any one time:

“Best appliance in our kitchen. Our weekly grocery budget is $150 and for that we feed anywhere between 6 and 9 family members at a time! Plus we are mostly organic and vegetarian.

Packaged food is almost non existent and everyone knows how make bread. Half our household have food intolerances as well!The children can all use it to cook and it saves on time by doing much of the process without having to stand in the kitchen! We’ve had one for three and a half years now and a second for the past two.”
And Sally:
“If you do anything non standard you’ll love it! I can’t buy any processed foods as my son goes hypo so I use it three + times a day now! I just made the best cheesy scones in it.”

Does the rise and rise of the Thermomix say more about how we value our time?  That we are so time poor we are prepared to spend serious money in exchange for more time to do other things in life?  I mean, that’s also a part of what MamaBake’s all about – more free time for Mum (except I bet you don’t get the laughs with a Thermomix like you do with your MamaBaking sisters!  I jest).

Unnervingly, as someone who manages a community, I have also noted that this gadget has the potential to divide.  I have witnessed many Thermomix threads digress into something ugly; dividing women into Have’s and Have -Nots and turning on one another.    I don’t know that I am aware of any other gadget with this kind of power!  And of course this isn’t the fault of the Thermy…

One thing is for sure, those that have one (overall), swear by it and wouldn’t trade it in for nuttn:

“I’ve owned mine for nearly four years and would grab that before my husband if the house was on fire” Rhonda.

You can read the entire Facebook thread here for some wonderful, honest reviews from Mothers who own a Thermy (no selling please).

*What is a Thermomix?

The Thermomix is a kitchen appliance that combines the functions of 10 appliances in one unit: they chop, beat, mix, whip, grind, knead, mince, grate, juice, blend, heat, stir, steam and even weigh food.

Contrary to popular belief that it is a new, whizzbang gadget, the Thermomix was launched in Germany as a food processor in the 1960s. After many years of innovation, it found its way onto the Australia market in 2000.