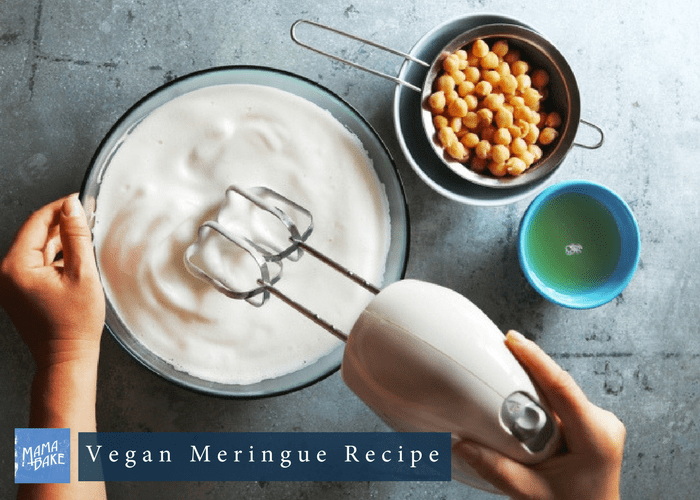 We’ve been down the vegan road on MamaBake a few times over the last few years, as both Michelle and I dabbled in veganism, vegetarianism and hitched a ride on the clean eating wagon.  Yep, give us a food ‘fad’ and we’ll most probably have given it a go.  It comes with the territory of food writing.  Though I’m not a vegan (my favourite meal is a thick, very rare steak with butter, garlic, salt and pepper), I’ll happily try out a recipe if it piques my interest; this one did just that.

Egg white free meringue?  Impossible surely? And my other question; why?

Well, vegan or not, there are many reasons why eggs are a no no for a lot of people, and an egg free life should not mean a pavlova free life.  A while ago, a vegan chef almost broke the internet with his discovery of the magical like powers of chickpea brine, or aquafaba, to mimic the light and fluffy egg white.  What a revelation!

“Its unique mix of starches, proteins, and other soluble plant solids which have migrated from the seeds to the water during the cooking process gives aquafaba a wide spectrum of emulsifying, foaming, binding, gelatinizing and thickening properties.”  (source – aquafaba.com)

Not only perfect for an egg free pav, what about meringue frosting on cupcakes?  Macaroons? Lemon Meringue Pie?  Good grief…the possibilities are endless!  This recipe will give you enough meringue for a standard size pavlova base. As a general guideline, 30ml (2 Tablespoons) of aquafaba = 1 egg white.

Okedokey then, let’s give it a try.  Before you start, here are a few tips:

(enough to make a regular pavlova, or to be adapted to the meringue recipe of your choice)

170ml  aquafaba (I used the liquid from 1 full tin of chickpeas and topped up with a few mls from a second.  The rest, I used in a vegan chocolate mousse! Recipe for that one, later this week.)

1/2 cup of sugar (adjust as your sweet tooth desires)

Preheat your oven to a very low 93-100 degrees C (depending on the heat retention of your oven!)

In a clean, oil free metal bowl, add the aquafaba (chilled if possible) and the cream of tartar.

Using either a stand mixer with the whisk attached, or a hand held electric mixer (which I did), on low speed, whip until the surface is bubbly.

Slowly add the sugar, speeding up to medium, until combined.

Up the speed to high and keep beating until the mix goes all glossy and white, just like ‘real’ meringue.  Peaks should begin to form.

That’s it!  You’ve got egg free meringue!  From here you can turn it into a big pavlova, mini pavs, or, put it into a piping bag and make little biscuits!

If turning into a pav, bake for 2 hours at 95 degrees C and then leave in the oven, with it off, door ajar, for another hour to get the true crunch.

More curious ways with chickpeas as egg replacers in these beauties too.

I’ll be sharing the method for the Vegan Pavlova with whipped cream and berries, along with the amazing egg free chocolate mousse, in our next newsletter.  Sign up for free membership here or for all the benefits of our Cooking Club, please click on the image below.