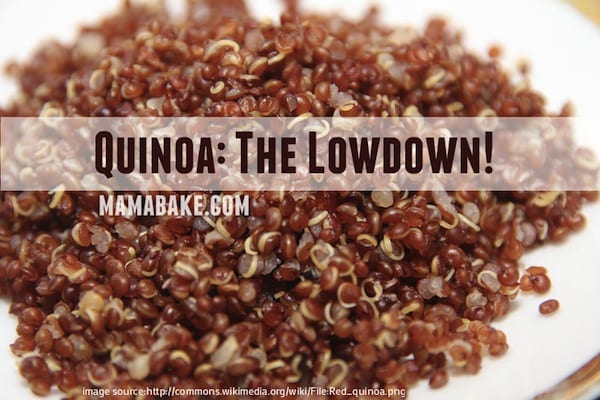 Quinoa – we see it everywhere, often.  We have no idea how to pronounce it so don’t dare ask the assistant at the shops.  We hear that it will solve all our woes, and it seems EVERYONE is on to it, cooking it, eating it, breathing it and the health media seem to worship at it’s altar for being the food of foods.

How do you even pronounce that word?

Let me put you out of your misery re: how it is pronounced.  This is how you say it: ˈkinwɑ or KEEN-wah or KEE-no-u’.

I’m a KEEN-wah gal myself.

But what is it, exactly?

Quinoa is a gluten free seed.

Quinoa is the seed of the goosefoot plant, and is a grain-like crop grown for its edible seeds. It is not a member of the true grass family so is not classified as a true cereal or grain.  This is what it looks like before it is cultivated:

What is good about it?  What is ‘Super Food’ about it?

Twenty years ago, NASA researchers sung its praises as potential astronaut chow, mainly for its superior nutrient density. No less an authority than the UN’s Food and Agriculture Organization hails it as “the only plant food that contains all the essential amino acids, trace elements and vitamins and contains no gluten.” The FAO is almost breathlessly enthusiastic about quinoa—it has declared 2013 the International Year of Quinoa and even runs a Facebook fan page for it.

And quinoa has generally been a success for the people who grow it. Unlike other southern-hemisphere commodities prized in the global north, like coffee and cocoa, quinoa, for the most part, isn’t grown on big plantations owned by a powerful elite. A 2003 Rodale article describes its cultural place in the Andean highlands, an area that encompasses parts of Bolivia, Peru, and Ecuador.  (Source)

Where does it come from originally?

It is grown in South American from the Chilean coastal regions to the Andes near the equator.  It is now grown

What and why is there controversy around Quinoa?

According to Mother Jones: the economics are simple: “As the price has risen quinoa is consumed less and less in Bolivia. It’s worth more to them [the producers] to sell it or trade it for pasta and rice. As a result, they’re not eating it any more.” In other words, farmers are starting to see quinoa as a product that’s too valuable to eat—they can use the proceeds from selling to buy cheaper, but less nutrient-dense, staples like white rice. There’s also a status issue—quinoa was once a subsistence product, and when people pull out of subsistence mode, there’s a tendency to switch to higher-status foods, even if they’re less healthy.

In a short period of time, quinoa has gone from a local staple to a global commodity. “When you transform a food into a commodity, there’s inevitable breakdown in social relations and high environmental cost,” as Tanya Kerssen, an analyst for Oakland-based Food First told Time last year.

On the other hand, a global expansion of quinoa production could also cause its price to crash—as happened to coffee in the late 1990s after Vietnam charged into coffee farming, causing a global glut. If a quinoa glut drove prices low enough, Andean farmers’ investments in land and processing infrastructure would be wiped out.

As Tom Philpott (author of above) points out it is a complex and tricky issue and simply purchasing Australian grown quinoa might not be enough to relieve any kind of moral conscience around the ethics of the greater quinoa situation.

If you’re still keen to use it, we have recipes: