Yesterday Someone Knocked on my Door … 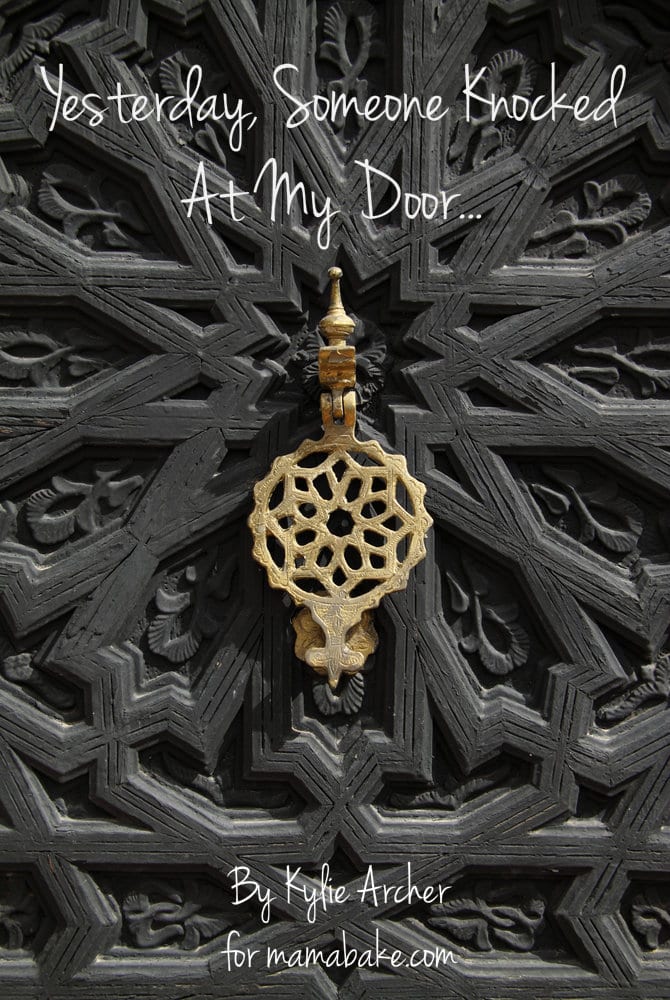 Yesterday someone knocked on my door and asked me to donate money to cancer research. I burst into tears. I was holding onto my youngest bub and just started sobbing and shut the door. I wonder what the poor young Irish boy at the door was thinking as I shut the door in his face with tears streaming down mine. I feel for him, and I feel I owe him some kind of explanation.

So here it is.

Almost two years ago my father passed away from cancer.

Perhaps for my own sanity, I’m still convinced he’s somewhere else in the world for work. This is only consolidated by the fact that the man whose hand I held as he drifted away didn’t look anything like my father, hadn’t behaved like my father for months and had lost hope.

Let me take you back in time. The last memory I want to have of my father was when we were in Bora Bora for a holiday in May 2011. He wasn’t feeling the best, but he was pretty much his usual self, laughing, drinking and having fun. He’d found a lump in his neck- it was the size of a golfball by this stage, but I didn’t really think there was any way it could be cancer. There wasn’t anything wrong with Dad.

We got home and tests were done. I remember the day I called my husband, sobbing with my 9 month old daughter on my lap, saying that Dad had cancer and I needed him to come home I was distraught. I wasn’t completely sure what I thought my hubby was going to be able to do, but I wanted him here. They gave him 5-10 years. That certainly wasn’t a death sentence to me.

He had to have more tests. One caused a heart attack. It was awful. Mum rang saying he’d had a heart attack on the table during the test and she didn’t know anything else. I didn’t know what to do, I was torn, I couldn’t take my daughter up to the public hospital- she was sick and I had no one to mind her. I waited until that evening and went to the hospital. He seemed fine.

They began chemo. The first time I visited they said it was going great, he was looking good, laughing and saying this cancer thing was a walk in the park. Then it hit him, the nausea, the vomiting, the inability to even get around by himself. He had a week in the hospital for chemo, then two weeks at home feeling horrendously miserable, then back to the hospital for chemo. It didn’t work. They gave him 6-12 months. Still, not a death sentence.

All you ever seem to read about cancer is survival stories, rosey, happy family stories with a happy ending and SURVIVAL. He was going to be fine. My Dad was larger than life, in so many ways, he was a big man, with a big personality. He made people laugh out loud, he loved good food and good alcohol with it. He was the epitome of what a survivor should look like. I get it, if people told the horro stories, we’d all lose hope.

But it wasn’t to be. Suddenly they were talking palliative radiotherapy. Maybe get a few more months, weeks, days. It didn’t seem fair. Then it hit me. He had lost hope. I talked about Chinese Medicine, acupuncture, clutching at straws, I would have suggested anything at this point. The radiotherapy was bad. He was so sick. I’ve never seen anyone look so grey, so dull.

Dad went into hospital one more time. He was sick, vomiting, couldn’t keep anything down. But he was swollen, with weepy sores on his legs. He was sick. For the first time I realised he was truly sick. I guess I’d always realised, but I’d tried to stay hopeful, tried to keep some light in the situation.

The last time I spoke with him, I was in hospital for gastro. When talking to him on the phone he was fading. A nurse took the phone off him and told me I should come up. They made special allowances to let me in and masked and gowned me because I’d had gastro. During the day, everyday, I was there from the Tuesday through to the Friday when he finally stopped suffering. Just a shadow of my father without even a glimmer of what he had once been.

The funeral was the next week and I don’t remember a thing about it. A friend commented that she’d never seen me grieve, and I think that was because I wanted to remember my father on the beach in Bora Bora, not the man who died on the bed in the hospital, so many shades greyer than he had ever been.

So, to you, the Irish guy who came to my door, I’m sorry but you slashed open a wound I’d tried so desperately to ignore and you opened the floodgates in a way I never really wanted to. Can you do me a favour? Can you you do one thing for me? Can you stop being a bloke and go to the doctor when there is something wrong? Check things out before they go so damn far that there isn’t anything that can be done? Because if you don’t manage to do that, you cut my heart open for no reason at all.

Some resources here for cancer patients and their families.
If you are grieving and need support, go here.
If you feel it is an emergency call 000, or Lifeline 13 11 14 for a one-on-one chat.