Book Review: ‘Mama – Dispatches from the Frontline of Love’

By Rachael Mogan McIntosh
*This is an unsponsored review. 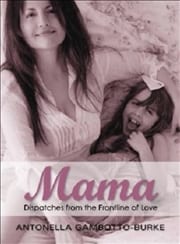 Books about motherhood usually follow something of a predictable formula. No matter the philosophy behind them, they tend to deal with the practicalities of childbirth and child-rearing. When they delve into the emotional realm, it’s largely to explore psychiatric issues like post-natal depression, the emotional landscape of the post-baby partnership, or the psychological aspects of child development.

‘Mama – Dispatches from The Frontline of Love’ by Australian writer Antonella Gambotto-Burke is something of a different beast. It is a fierce book, beating with passion and energy, and it has a bone to pick with modern parenting culture.  Acclaimed Australian writer Gambotto-Burke brings her idiosyncratic brand of journalism – both academic and emotional – to this most primal of subjects: the nature of motherhood.

Gambotto-Burke is unafraid to describe and own the transformative, primal force of love that comes with the birth of one’s first child. The book explores issues as wide-ranging as femininity, intimacy, marriage, death and the sexualisation of children. Gambotto-Burke conducts interviews with a palpable energy that fizzes on the page. She spars with Steve Biddulph, Shelia Kitzinger, Laura Markham and Melinda Tankard-Reist, among others.

Amongst interviews and truncated ‘guides to parenting’ with writers, educators and experts, this book explores Gambotto-Burke’s own foray into motherhood, which required her to grapple with her own troubled childhood, and the somewhat emotionally disconnected identity she had created as a result. ‘Repudiating the vulnerability I felt had wrecked the lives of women around me,’ she says, ‘I modelled myself on my controlled father….Consciously, the prospect of motherhood repelled me.’

When she did become a parent, Gambotto-Burke was shocked and rocked by the intensity of the love she felt for her daughter, Bethesda. Gambotto-Burke, at her best when turning her white-hot intellectual curiosity on herself, captures in her writing the intensity of the process by which women are alchemised – made anew, never to be quite the same again – when they become mothers.

‘On first hearing that little voice – as fine and friable, I thought, as cotton thread – the impact on my soul was that of the highest magnitude of earthquake, those that occur every hundred years, say, or every thousand. The old shell that I called myself cracked and was swallowed by a sudden crevasse, and just as suddenly was lost in the commotion. That which I felt was not joy, or even a willingness to throw myself in the path of a car to save her, but simply this: a desire to be with her so plunging I would have killed for it.’

It’s a fiery book. Gambotto-Burke can be funny and endearing, but she can also be infuriatingly didactic. The tone of her essay ‘why I don’t own a television’ rings judgemental, as does the exhortation ‘never, ever listen to the radio or loud music when your baby/toddler is around.’ To my mind, her strong adherence to the tenets of ‘attachment parenting’ can feel like the placing of the child’s needs above the mothers needs in every instance, in a way that can feel, even in the reading, exhausting and impossible.

But as a writer, Gambotto-Burke has a compelling voice, and as an investigative journalist, she brings together a series of threads that weave a fascinating and novel picture of modern parenting culture. Her book, Mama, makes an important contribution to the body of work about motherhood.

You can buy ‘Mama – Dispatches from the Frontline of Love’, here.

Rachael lives with her sexy geek husband and three small children in a beach town south of Sydney.  Here she cooks, teaches her children the art of interpretive dance, kisses the baby’s face off and tries, at least once a day, to laugh hard enough that she wets her pants a little bit.  It makes for more washing, but great happiness.