When Every Night is Big Batch Night! A mother of 6 reviews the MamaBake Big Batch Basics e-book. 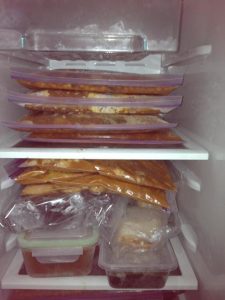 This week I’ve been cooking from the MamaBake Big Batch Basics Recipe eBook, which sits nicely on my kitchen bench wrapped in my iPad and has broken me out of a bit of a cooking rut.

A few years ago I had a respectable freezer stash and usually had a spare casserole or two ready to contribute to another family, but the large scale cooking involved with a family of eight, including three teenagers, caught up with me and I felt as though I was cooking at capacity for almost every meal – after all, when you’re already doubling a recipe, you need to quadruple it to have a spare meal in the freezer! It’s been great fun playing with a cookbook that absolves me of the need for mindless equations and adjustments to each recipe for larger sizes. The sheer quantity of these meals has been just wonderful – I have a respectable freezer stash again just by cooking a big batch meal for a few nights running!

This MamaBake eBook been good for catering to different meal requirements. There’s a good range of recipes that work around the various food intolerances of our friends and family (nut, gluten and dairy free – and even a goodly selection without tomato for those with salicylate concerns), and so far they’ve all been relatively simple to toss together and cook without too many fiddly bits needing attending at critical times (when I can guarantee somebody will be stuck wailing up a tree, needing a bath, looking for help with algebra or all of the above).

The Big Batch meals work particularly well for large families because they’re so easy to divvy up – when you’re living with three teenagers you know that on any given day you have a reasonable chance of them eating as though they’ve been starved for a week, bringing home a friend each who hasn’t been fed for a week or having a last minute work or social engagement so that suddenly you’re only feeding half the numbers! Casseroles and soups are perfect for stretching or storing – and there’s no tricky working out how much of a whole steak or chicken breast needs to be divided between the toddler and the preschooler!

But how about the taste? So far, I’ve cooked six recipes – which is a considerably better ratio than I actually cook from most of the recipe books I browse – and only one has been rejected as a worthy addition to our regular meal selection. There have been some unexpected successes – the bolognaise that I thought might not have enough flavour was a hit with everybody, and the dahl that I thought we might be eating for months because it used yellow instead of red lentils had only enough leftovers for one meal!

There are a few extras I’d like to see – more photos of the actual dishes, explanations as to some of the less usual techniques (I’ve never slightly crushed cardamon pods before!) and a better idea as to the final quantities, particularly for the slow cooker meals that I might like to make to the maximum capacity of my slow cooker – but I’m looking forward to trying even more recipes this week and think every eBookshelf deserves a copy of this book!

Head on over and grab yourself a copy here!